First post here although I've been lurking for awhile. Just saw this on a proguitarshop demo and thought I'd start a discussion. In the demo they actually show a gut shot which I've attached. I'm a noob by all definitions but I see an unmarked op amp and diodes/LED combinations so I'm thinking tubescreamer variant? $350 dollar price tag... gulp. It does sound pretty nice. 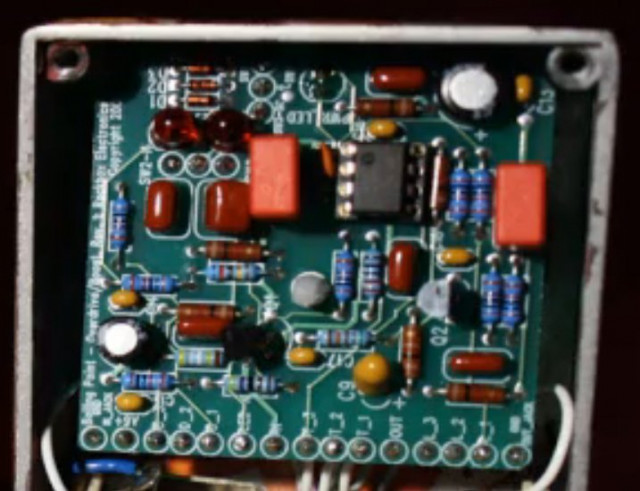 Since there's an op amp and two transistors, I'm guessing it's some kind of 808-based circuit. I see LEDs and asymmetric silicon diodes, which I assume are for clipping (what else would they be?).

It's also possible it's Rat with some kind of single-tranny boost on the front end and the usual 2N5458 JFET output buffer on the back end.

But the use of carbon comps for certain resistors while the rest are metal film makes me think it's an 808 derivative. I've seen DIY'ers and boutiquers both do this.

But who knows? It might be something that just looks a lot like a Screamer. Anything is possible.

A few months back I tested out about a dozen different dirtboxes at a store here in Melbourne, and this was one of them, and was my favourite on the day, I ran a Nash Tele Deluxe through an Orange 30 watt head. Just listening to it and playing it, it sounded a hell of a lot like my Deaj YATS CJOD clone, with a little extra bass in there. I would hazard a guess that it's a similar 808 style OD, with a different cap switching options for bass boost/stock 808 and toggle options for clipping diodes like IN4148's and LED's, and perhaps with a Burr Brown opamp as it had a very similar feel to the YATS. Idid like it a lot.
Top

It would be nice if someone post the schematics and layout of this pedal...
Top

Looks waaaay too much like a tube screamer. 2 - transistors, 2 - 1uf caps, op amp, typical clipping arrangement's. Would not surprise me if this was a CJOD or something...
"The man who says he knows everything will never know the truth"
C.S. Lewis
Top

This one sounds great in all the youtube videos. I'm looking forward to build it when we get the schematics and analyzing why it works so well will also be intriguing.
Top

The layout appears to be very similar to the BYOC OD board, does it not?

http://buildyourownclone.com/808instructions.pdf Page 4 of the PDF shows the board.

The Boiling Point has random, small orange caps though near the transistors and corners of the board. Does anyone know what those are?
Top

anyone have pics of the trace side? I would love to see a layout for this as they are hard to find + very expensive..... I wanna compare one to my other TS based builds..
"The man who says he knows everything will never know the truth"
C.S. Lewis
Top

I don't think that's really necessary. Reference this URL for a good idea of what's going on:

I think you'll find the layout is VERY similar. Sub in different clipping diodes, put in a switch to select your diode options, and have fun.
I'm a "professional."
Buy my products and make me rich.

I think you'll find the layout is VERY similar. Sub in different clipping diodes, put in a switch to select your diode options, and have fun.

I had one of these here earlier in the week. It didn't work (faulty power socket - breaking both the battery and the external supply connection). Changed the socket, and the thing worked. Pretty ordinary Tubescreamer as far as I could see, though with more bass, and using a Maxim dual op-amp in the one I saw (the top was sanded, but the underside wasn't). The PCB quality is quite cheap-looking with really fine tracks. There are probably about $25 parts involved, including the case and knobs, and $100 would be a maximum fair retail price - with a pre-drilled box, you could build it in half an hour or less.

I think we need a Tubescreamer thread with a whole set of definitive mods, so that it's trivial to throw together a CJOD or an 808 or whatever version else - same board, slightly differing values! I can design the PCB if wanted, and will accommodate all the mojo parts for those who believe that there's a real difference between components. We can use "hard switching" with the Millennium Bypass to drive the LED or have an option for electronic switching.

Can someone put together a quick spreadsheet with the values for the common Tubescreamer variants and the copies and put it up here?
"Why is it humming?" "Because it doesn't know the words!"
Top

great idea!!!!!
"The man who says he knows everything will never know the truth"
C.S. Lewis
Top

Have you guys given up?
Top

Not really enough pics. It would be impossible to trace from those.

Fwiw it is unlikely to be a tubescreamer clone just by the number of caps in that thing. Looking at a rat schematic there are about the same amount of caps, 1 or two may be doubled up to ensure no loss of high frequencies in this. But there are a lot more resistors in this than on the rat...

I know this comparison doesn't tell much at all (well except that it's not a straight up clone of a screamer) but its the best that's possible at this time.

Hmm. The amount of hype this pedal is getting is insane... Reminds me too much of the 'dynamic overhype'.
Top

It's getting hyped so much because it's $350. It has to be hyped like mad or else it won't sell. That's the gamble of pricing an overdrive that high: you have to hype it to death and make every manner of outrageous claim to convince people that it's actually worth that much. People will definitely pay $350 for an overdrive, but they have to be convinced it's worth it, and the only way to convince them is to do the classic hyping techniques.

The hype works too... look here we are wondering what it is, when it's obviously just a tweaked out boring old bullshit overdrive. It doesn't matter what it is, or what it sounds like. It's just another product to sell.
"Analog electronics in music is dead. Analog effects pedal design is a dead art." - Fran
Top

I agree its hyped up and really pricey, but the PGS soundclips sound very nice to my ears, and it doesn't sound like a TS to me. I'm not defending anybody, I know there are several production tricks that may or may not have been used to record the clips, but two things: sounds very nice and doesn't seem to have that anoying clear attack with background fizzy dirt present in most TS and derivates alike. BTW some of the color combinations are really neat, some are not. For 350 i'd like to get the cool colors at least

but fortunately I'm a poor bastard, might just end up building one when and if the schemo is revealed.

Doods. Its a TS. Layout bears a STRIKING resemblance to the BYOC OD. Seriously.
My $10 bet stands. Any takers?
I'm a "professional."
Buy my products and make me rich.