After publishing the weird article about the Harmonaphone, I googled the name of the designer and found a family website. Part of the website is written by Malcolm P. Hamer and details some of his guitar effect inventions, among which this automatic wah circuit. He writes:
AUTOMATIC WAA-WAA OPERATION

The wah-wah pedal (sometimes spelled waa-waa) was created by Brad Plunkett at Warwick Electronics Inc. in November 1966. A patent for the pedal was filed on 24 February 1967 and, that same month, the pedal was launched as a product by Warwick's 'Vox Sound Equipment' division. It featured on a number of records that year, for example, 'Burning of the Midnight Lamp' by The Jimi Hendrix Experience. A circuit design for a wah-wah pedal was published in the July 1968 edition of the UK magazine Practical Electronics. A few days after I read the article I modified the design to automate the action of the pedal, so that the guitarist could concentrate on playing the guitar without having to bother with operating a pedal. I immediately sent a description of my design to Practical Electronics, who eventually published it a year later, in July 1969. 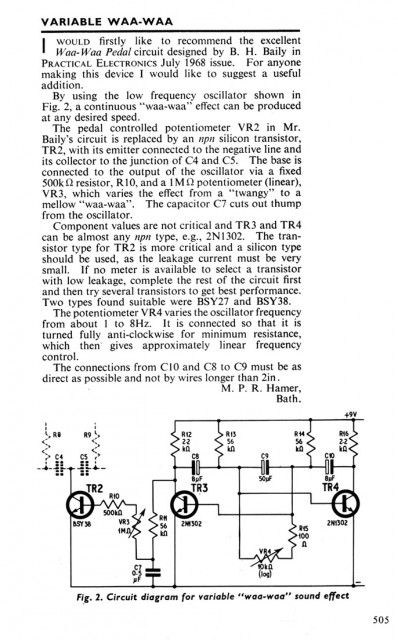 At the same time that I sent my design to Practical Electronics (July 1968) I also sent it to Vox to see if they would be interested in incorporating it into their wah-wah products. After four months' deliberation they wrote back to me on 7 November 1968 saying "this does not fit in with our plans for our present range of goods". Vox and others launched various forms of pedal-less wah-wah unit starting in the 1970s, but I received no further communications from Vox. I guess I should have filed a patent. 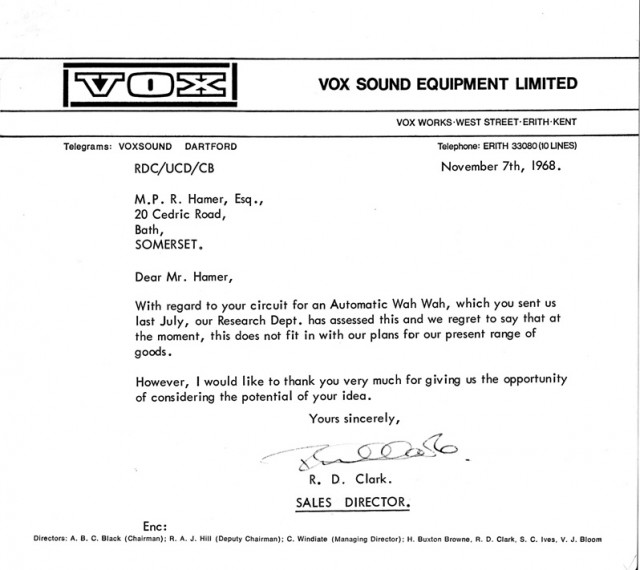 All documents in PDF: