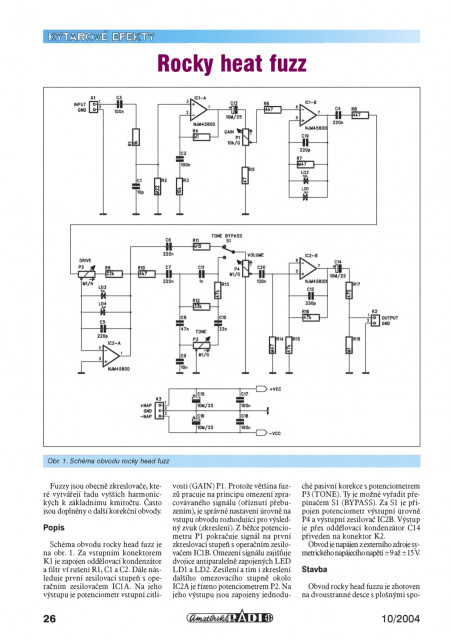 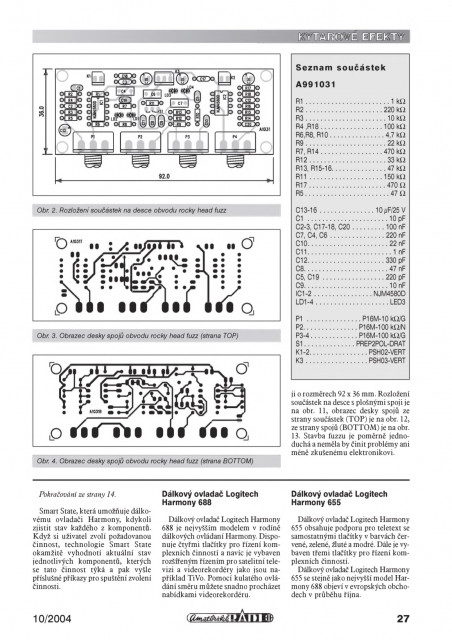 Google translation from Czech wrote:Fuzzes are generally distortions that produce a series of higher harmonics to the fundamental frequency. Often they are supplemented by other correction circuits.

Description
The circuit diagram of the rocky head fuzz is shown in Fig. 1. An isolating capacitor and a RF interference filter R1, C1 and C2 are connected behind the input connector K1. This is followed by the first amplifier stage with the operational amplifier IC1A. At its output is the input sensitivity potentiometer (GAIN) P1. Because most fuses operate on the principle of limiting the processed signal (excitation trimming), the correct setting of the level at the input of the circuit is crucial for the resulting sound (distortion). From the current of potentiometer P1, the signal continues to the first distortion stage with the operational amplifier IC1B. The signal limitation is provided by a pair of anti-parallel LEDs LD1 and LD2. The gain and thus the distortion of the further limiting stage around IC2A is controlled by potentiometer P2. Simple passive corrections with potentiometer P3 (TONE) are connected to its output. It is possible to exclude pre-switch s1 (BYPASS). For S1 is output level potentiometer P4 and output amplifier IC2B connected. The output is fed to the connector K2 via the isolating capacitor C14.
The circuit is powered from an external source of symmetrical supply voltage ± 9 to ± 15 V.