Unverified or incomplete effect build projects will be moved here until they are okayed.
Post Reply
15 posts • Page 1 of 1

Okay, so originally I wanted to have a delay with two Delay Time pots and a switch to toggle between them...but I wanted the ramping speed between those two times to be both non-instantaneous and user controllable. I do plan to work on that as well, but my experiments led me down a different path that I feel is at least somewhat novel.

So what we have here today is a PT2399 delay, the base of which I lifted directly from madbean's Sea Urchin (with a few filtering value changes to shave off hiss in the delay line). I added an LDR in parallel with the Time pot and a resistor in series with both of those (to set the minimum time). The LED that modulates the LDR is activated by a momentary switch (normally open). The LED on/off speed (or rise/fall time) is controlled by some limiting resistance and a large cap. The rise speed is fixed to a greater degree, but the fall time is user-controllable through the Decay pot. This little part of the circuit could certainly be improved upon, but it works as is.

So how does it work / what does it do?

The LDR is in parallel with the Time pot. The LDR's dark resistance is about 5M, and in parallel with 25K, that gives ~24.9K, so the LDR is effectively not in the circuit when dark. Pressing the switch lights the LED, which causes the LDR's resistance to fall to about 500-ish ohms. This brings the Time pot value down to about 490 ohms (but there is a series resistor of 10K that keeps the value between pin 6 and ground from going that low). If this change happens really fast, there's not much interesting to hear. But if you slow down that change, you get some cool sounds. Especially as the LDR goes back dark and the Time pot value increases back up to 25K (plus that 10K in series). It's similar to slowly turning the Time pot manually.

It's like a cool detune that goes up in pitch and then slowly returns to the root note. And you can control how quickly (or slowly) that transition happens. You can do crazy tape wow-and-flutter sounds, and also more subtle bends. And you can do it all with your foot instead of bending over to fiddle with the Time knob. You can also quick tap the momentary to get multiple pitch bends in a row. I'm still figuring out stuff with this nutty thing.

I really HATE hiss in a delay, and the 2399 can be prone to it at delay times greater than around 200ms. Check out C14 on my schematic. It's part of a three-way low pass filter (pins 12, 13, and 14), which is also the first filter in a second-order low-pass. I found that in order to reasonably kill the hiss, the actual cutoff frequency for the first filter is 33hz! That doesn't make sense because I know that I can't hear anything below about 100hz (I've tested my hearing). But that's what the math says. And I know that I can go more extreme with the filter and it makes an audible difference.

I think changing up the first LPF is loading the second one in a good way. I'm too lazy to do the math on all that. 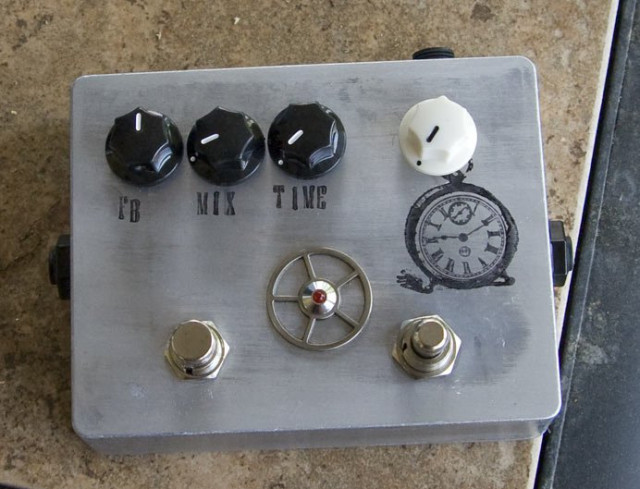 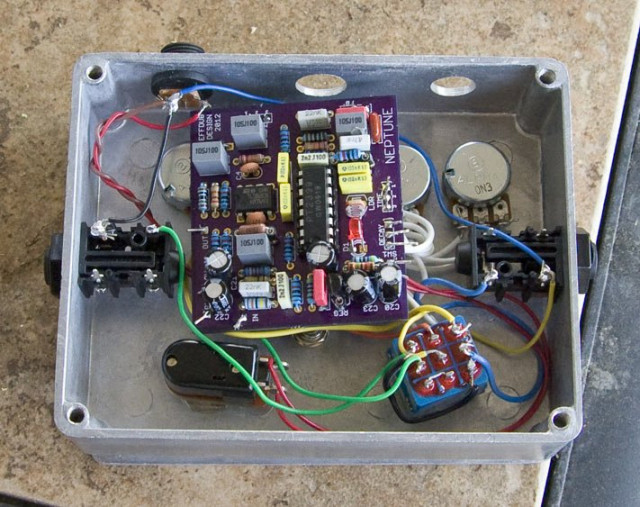 And finally the goods: 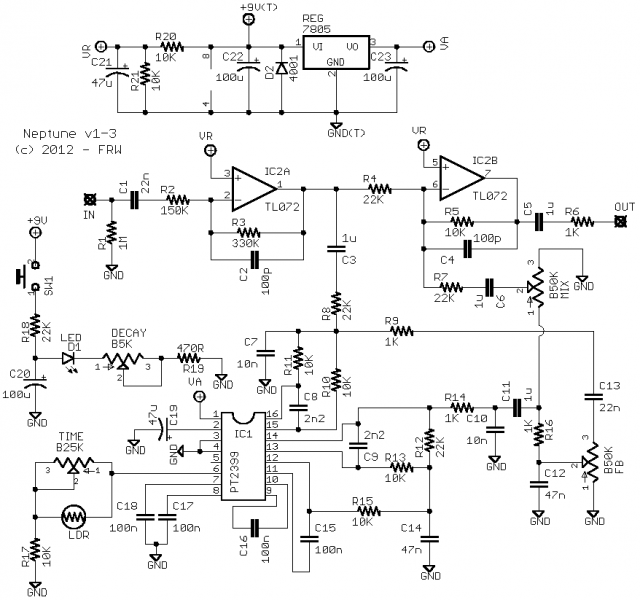 Very cool. I think I might breadboard this with the spare PT2399 I have.
Top

Cool, I still have some spare PT2399 chips doing nothing, and I was looking for a good delay circuit to use them in, so I might have a go at building one of these....

Just checked out the video clip demo, very trippy sounding, kind of reminds me of the delay based effects heard on one or two of Jimi Hendrix's albums, eg: songs like "Third Stone From The Sun", etc......

The runaway effects reminds me of what I used to do with my Ibanez Digital Delay pedal, I used to feed one of the outputs back into the input and then manipulate the controls while the pedal was feeding back....

Would anyone know if a KE-10720 would be sufficient for the LDR? I'm reading the datasheet, and it says the minimum dark resistance is half a meg ohm but doesn't state the maximum....http://www.datasheetarchive.com/KE-10720-datasheet.html the links is at the bottom of the page.
Top

Moustache_Bash wrote:WI'm reading the datasheet, and it says the minimum dark resistance is half a meg ohm but doesn't state the maximum

Yep. That's the same one I used when testing the circuit. Or at least it appears to be the same:

Yup, I ordered it from Tayda as well.

Thanks, man! Excited to build this

But, to anyone else who's built the Neptune. I did a build from |v|ark's vero over at Tagboard Effects. Everything sounds amazing. And it matches up with the schematic here, as best I can tell, once I added the 1N4001. Only problem is I don't find the Decay pot does anything at all. Can I ask what exactly the Decay *should* be controlling? Being on the backside of SW1, maybe it's just to control the decay of the warps (if so, I still don't hear any change), even though my inclination on a delay pedal would be that Decay is handling the decay of the repeats. I don't know, still new to reading schematics. Maybe it's just very subtle and I can't hear the difference.

So I'm just wondering if the internal LED is suppose to be on all the time? When I had it open, it's always on, and adjusting the decay pot kind of fades or shines it, but then it always falls back into the same brightness. The momentary switch makes it go a hair brighter, but doesn't sound at all like the vid. I've checked and re checked everything, and no loose connections, no bridges, everything's in the right place. Any suggestions?? Haha thanks.
Top

Has anyone tried doing a vero layout for this?......

courtesy of our good friends at Guitar FX Layouts

"..the finished product is just the garbage left over from the work." R.G. Keen
Top

Anybody figure out how to do a version of this without the warp feature?

Obviously, you remove the momentary switch, the LDR, the led. But what other components would you have to remove?
Top
Post Reply
15 posts • Page 1 of 1