Forum dedicated to helping people debug and troubleshoot non-functional pedals or builds. Please use an clear and informative title, indicating circuit and basic problem. Don't forget to mark the issue as fixed if this is the case.
Post Reply
7 posts • Page 1 of 1

Hi guys. So im building a big pedal board. 20 odd effects inside.

I get signal throughout all but i have some issues.

I am getting a weird watery noise coming through very quietly throughout, becomes very prominent when i engage:
Bit commander, animato (i know its a noisy circuit but this seems way above normal) and carcosa.

The fuzzily bear and carcosa appeared to sound as they should outside the enclosure aswell as the bit commander but inside they dont act properly. The fuzzily bear’s gain when cranked to ten appears to cut the gain only at the end of the sweep (from 9-10) the carcosa appears low in gain, noisey and prone to feedback.

Attached is a pic of the off board(s) wiring. The green line represents the ground chain for switches and inputs snd outputs.

Most of pedals are doubling up on power consumption exept for say the animato and looper pedal. Whcih have their own power output on the box. I have a harley benton iso pro 12 powering it all.
The grounds are connected to the pedal with an extra wire hooking the power supply ground to the ground on the box. 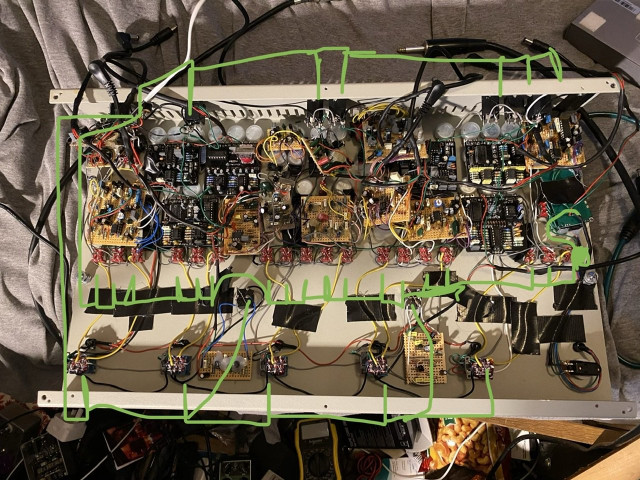 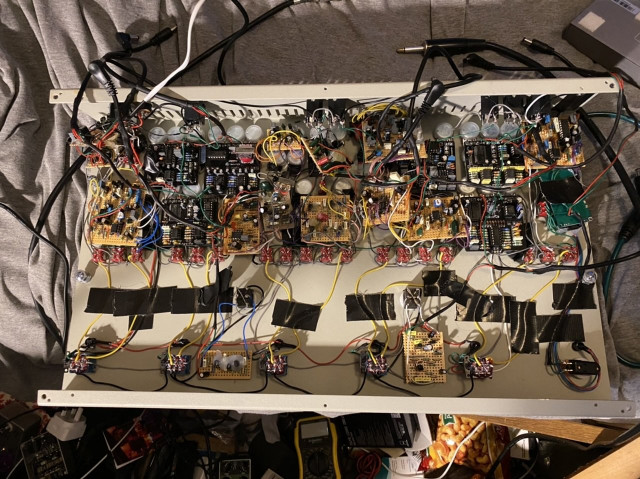 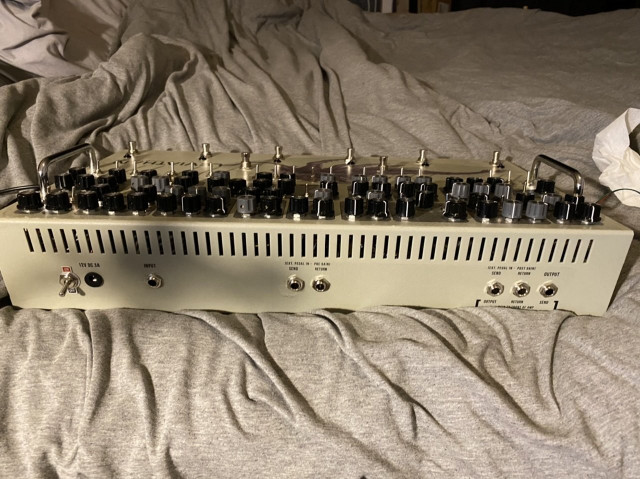 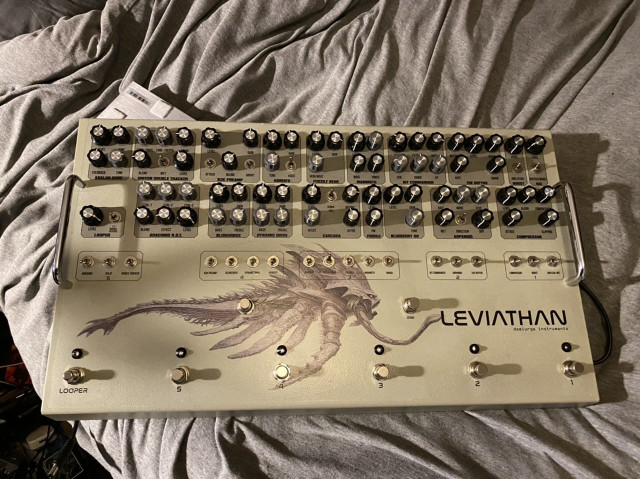 The Harley Benton uses a switching power supply. Have you tried a transformer based wall wart or a battery?
Layouts
Top

Hello
Are you sure the HB power supply is really isolated?
I've opened other cheap power supplies and very few are effectively isolated; I mean all the regulators are fed by only one secondary from the transformer.
You can check it easily:
unplug the power supply and all your pedals
insert some DC jacks in the psu outputs and get your DMM as diode test "beeper".
>>> the outputs grounds should not be connected

You may also need some buffers along the signal path, so many wires and switches to pass throught...
Top

You are completely bonkers! I love it!
Inside looks like shit, outside looks like Corny Pete can retire.
So much contradiction!
(also made the title a little more descriptive, aka clickbaity)
Please, support freestompboxes.org on Patreon for just 1 pcb per year! Or donate directly through PayPal
Top

modman wrote:You are completely bonkers! I love it!
Inside looks like shit, outside looks like Corny Pete can retire.
So much contradiction!
(also made the title a little more descriptive, aka clickbaity)

Haha thanks. Im aware it looks a rats home inside.

Fyi i i havent tried the power options but i will try in stages in a bit. I replaced several of the circuits to have them act exactly the same inside the enclosure. The only this left would be to dismantle and test and try again i suppose. I will report back on the psu issues if thst resolves anything. Do you think even though it states an “isolated” psu it could still be causing thr noise? I do think the noise is psu related. But the non working is a mystery. Would it be grounding issues or whatnot?
Top

Modman is right, I also love your build, it's very impressive outside

However you should take really care of the psu, a bad choice and it will ruin the whole build with ground loops, noise, etc.
As I said many cheap psus are sold as "isolated", but their are not galvanically isolated. The "right" isolation is achieved with a multitap transformer which offers several secondaries outputs.
The idea is to have only one ground as reference for the signal along the whole chain, and avoid ground loops between circuits and the psu.
You can also use daisy chains sometimes, but you'll mostly get problems if you use high gain circuits or fuzzes in the same chain.

Also I had the same noise problems in a big passive matrix looper, shielded wire everywhere, very good psu... I've solved the problems with the addition of input and ouput buffers on each loop (send/return).
That's what Cornish does in their custom pedalboards, and that's why you wouldn't have any problems if you used only Boss pedals

That's how I began to hate those 3PDT switches too.
Top

Thanks for the suggestions guys. I will get back asap as i have had to putnproject on hold while i get other jobs out the door. This will be continued