Now if we want to demystify something useful, I wish one of our many superstars would layout a workalike for the suhr backplate silent single coil system.

http://www.suhrguitars.com/downloads/pd ... _Flyer.pdf
It has been mentioned here before but I have found no one who can explain what more is at work here besides a wide dummy coil. Anyone have the knowledge? I would gladly nominate chipping in on this for someone to buy and layout for us.
$325 is stupid money for me and any sane non-recording professional player or middle class person.
But having this laid out would finally rid me of the annoying recurring habit of wanting more stacked humbuckers dressed as single coils. Some of those are good, but the best of them is not the equal to midline single coil strat or tele pickups.
"Contemplate it - on the tree of woe." :Thulsa Doom
Top

The entire system consists of a jumbo-size/low impedance dummy coil with its own volume and "tone" controls. The whole mess is in series with the lead from the signal coil that previously went to ground. The signal coil(s) are otherwise wired normally.


Like any dummy coil system it's not 100% effective at eliminating noise and hum, but it does a very good job while leaving the basic tone relatively intact.

Awesome!
"Contemplate it - on the tree of woe." :Thulsa Doom
Top

Great thread at the url!
I will digest it thoroughly tonight.
It looks doable and real.
I am going to do it to my G&L Legacy.
I will definitely post results in the next couple weeks as I proceed.
Thanks for the url. definitely
Main labor will involve winding a 200 turn coil.
Does anyone have advice for diy coil winding.
I will have to research it. I have never thought seriously about winding pickups or anything else.
The adventure continues...
"Contemplate it - on the tree of woe." :Thulsa Doom
Top

I will place 4 poles on a rectangle of perfboard and wind it using my record player. forum called for 200 turns. @4 min and 26sec of winding should get me there.

I will post progress.
"Contemplate it - on the tree of woe." :Thulsa Doom
Top

I need a question answered or answer confirmed.
This is the schematic for the electronics connected to the dummy coil of the single coil silencer (from the patent.

I see the large(dummy) coil connects to ground.
How should I connect the signal coil of the strat pickup to the dummy coil? The pickup lead goes to the tone and volume control as normal.
Where does the pickup connect with the dummy coil?
Which lead do you think?
I am not home yet to work on this, but trying to sort it all out in my head.
"Contemplate it - on the tree of woe." :Thulsa Doom
Top

earthtonesaudio wrote:The whole mess is in series with the lead from the signal coil that previously went to ground. The signal coil(s) are otherwise wired normally.

HA!
Mommy, what is reading comprehension?
"Contemplate it - on the tree of woe." :Thulsa Doom
Top

moved to guitar rewiring.
"You've converted me to Cubic thinking. Where do I sign up for the newsletter? I need to learn more about how I can break free from ONEism Death Math." - Soulsonic

I will make a photo essay of this adventure.
I plan to wind the dummy coil by cutting a tube in to two pieces and coiling the magnet wire by making a wheel with rods radiating from a jig on my cordless screwdriver. i will count windings by simply placing a flag on the tube. I will also place 2 sided adhesive tape inside the tube to help secure the windings.
"Contemplate it - on the tree of woe." :Thulsa Doom
Top

Beware! The backplate system works fine, but does not work very well for reverse wound reverse polarity pickups, like in the G&L Legacy! You need non rw/rp pickups for it to work correctly in every switch position. Otherwise it will cancel hum in some switch positions, and add hum in others.
Top

I am replacing the middle pickup with the bridge of another legacy. I have three strats. If this works I will probably replace the reverse wound RW/RP middle pickups and mix and match to have two standard common wound sets and one set of three RW/RP pickups.

I am thinking now I will cut a piece of plastic tubing in half and place double sided tape inside the perimeter. Wind the coil inside the cupped tubing in a rectangle. tape the top of the exposed coil. Then tape the two tube halves back together.

I have an American Highway strat I have reilced in the past. i was considering extending the routing in a rectangle for the pickups to accomodate the dummy coil around the area of the pickups, but inside the coverage of the pickguard. The routing would be at the approximate depth of the present pickup cavities.

Does that sound like a good idea?
I hate to use the backplate. I always remove them.
"Contemplate it - on the tree of woe." :Thulsa Doom
Top

If your dummy coil is around your pickups, then you will get (a little) signal loss as the dummy coil is no longer just a dummy coil. It will start to pick up the strings out of phase, albeit at a very low output level.

The inductance of the dummy coil will also get bigger, as there will be iron (alnico from the real pickups) inside this coil now. This will change it's frequency & output response.

Why not use a "backplate" that is more like a "back ring" to keep that spring cavity & trem block accessible?
Top

I probably will just end up using the backplate as previously made by suhr. I will cut it oversized like the one on the market.

I planned to have the coil beneath and around the pickups. There will only be a few cm difference (about 3/16 to 1/4 in) in distance from the pickup coils under the pickguard and on a backplate. Is that a significant difference in this context?
"Contemplate it - on the tree of woe." :Thulsa Doom
Top

As long as the pickups are not inside, but above the dummy coil, things should be fine. If you lay the dummy coil on the bottom of a routing as deep as a pickup cavity, it will be under the pickups, as stratpickups sit raised in their scratchplate.
If the pickup magnets will not form a core to the dummy coil, then the things I said in my earlier post don't apply.

Let us know how it works out for you!
Top

swampnoise wrote:If your dummy coil is around your pickups, then you will get (a little) signal loss as the dummy coil is no longer just a dummy coil. It will start to pick up the strings out of phase, albeit at a very low output level.

The inductance of the dummy coil will also get bigger, as there will be iron (alnico from the real pickups) inside this coil now. This will change it's frequency & output response.

I have been using this to my advantage, by using either coil split rails or coil split stacks.

...The big "trick" is to find ones that have a really subtle effect of what is described above. Some are horrid sounding, and will almost sound like positions 2 and 4 in a Strat. Others are much more mild.

The other big trick is to pick a rail/stack that will give you around 6K - 7.5K when split. Not a hard and fast rule (D.C. resistance with pickups is almost a useless way of measuring them), but it at least provides a "ballpark."

I've had less success with the rails, since their ceramic mags tend to be so strong. But the super high output GFS ones are pretty neat when split, IMO.

I've had much more success with the old DiMarzio HS series pickups, especially the HS-3 with the bottom coil being used as the dummy.

As long as the pickups are not inside, but above the dummy coil, things should be fine. If you lay the dummy coil on the bottom of a routing as deep as a pickup cavity, it will be under the pickups, as stratpickups sit raised in their scratchplate.

I understand. I thought you might be saying they would be too close at the bottom of the pickup cavity. I bought the magnet wire at Radio Shack. I just need the time to do this correctly and then experiment and adjust to taste. It sill looks like Labor day weekend before I can do this. I am a teacher and school is starting.

I have gotten soft not going to work for ten weeks.i am starting to feel optimistic about this.
"Contemplate it - on the tree of woe." :Thulsa Doom
Top

This plan is not dead. I have tried my own thing here. Instead of a wire coil, I have experimented with a copper foil tape loop antenna at the bottom perimeter of the pickup routs. I used thinner tape than this.

I do not know how this will sound yet.
I will etch the board for the passive electronics this week.
Does anyone have any ideas about necessary resistor values of #21 and 19 from the patent layout below?

If this ineffective I plan to try placing copper tape on a strat backplate and then etching a copper trace for an antenna.

Like this but just the outer ring @ the perimeter..

If anyone has input on the resistor values, I would be grateful
Thanks to everyone involved here.
"Contemplate it - on the tree of woe." :Thulsa Doom
Top

Here is a quick pic of mine. I did this about 3 years ago and it works great by the way. The bridge pickup is 100% noise free and the neck and middle are about 80% quieter than stock. This is because the dummy coil is centered on the bridge pickup. Also I didn't notice any change in tone having the coil in series with the pickups. I don't remember all the details of this project because it has been so long. Next time I have my guitar apart i will give more details. The following is how I recall doing this:

-Back plate is made up of three pieces of plastic glued together to create a bobbin to wind the coil. The middle piece is smaller in diameter than the outside 2 pieces.
-I think I wound 300 turns of 38 AWG magnet wire on the bobbin.
-As for R19 and 21 I am pretty sure I left them out and just used the trimmers.

When I was tuning the circuit with the trimmers I couldn't get it to hum cancel and I almost gave up. Frustrated I set the pickguard back down on the body (I had it removed and 90 degrees to the body trying to tune it) and bang, the hum was gone. Make sure the back plate and the pickups are in their permanent positions when you are tuning the circuit.

I heated the corners up on the back plate and bent them in towards the body because I found them uncomfortable in the playing position. It is fine now. Who would have ever thought that an original 62 strat with stock pups could be noiseless. 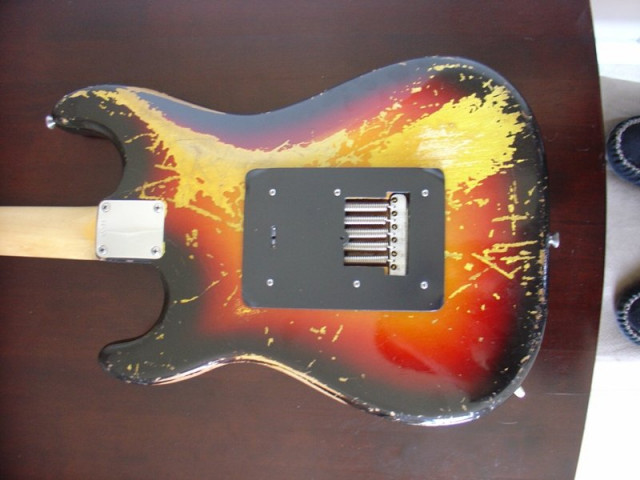