Just took a quick shot before I had to go to class. 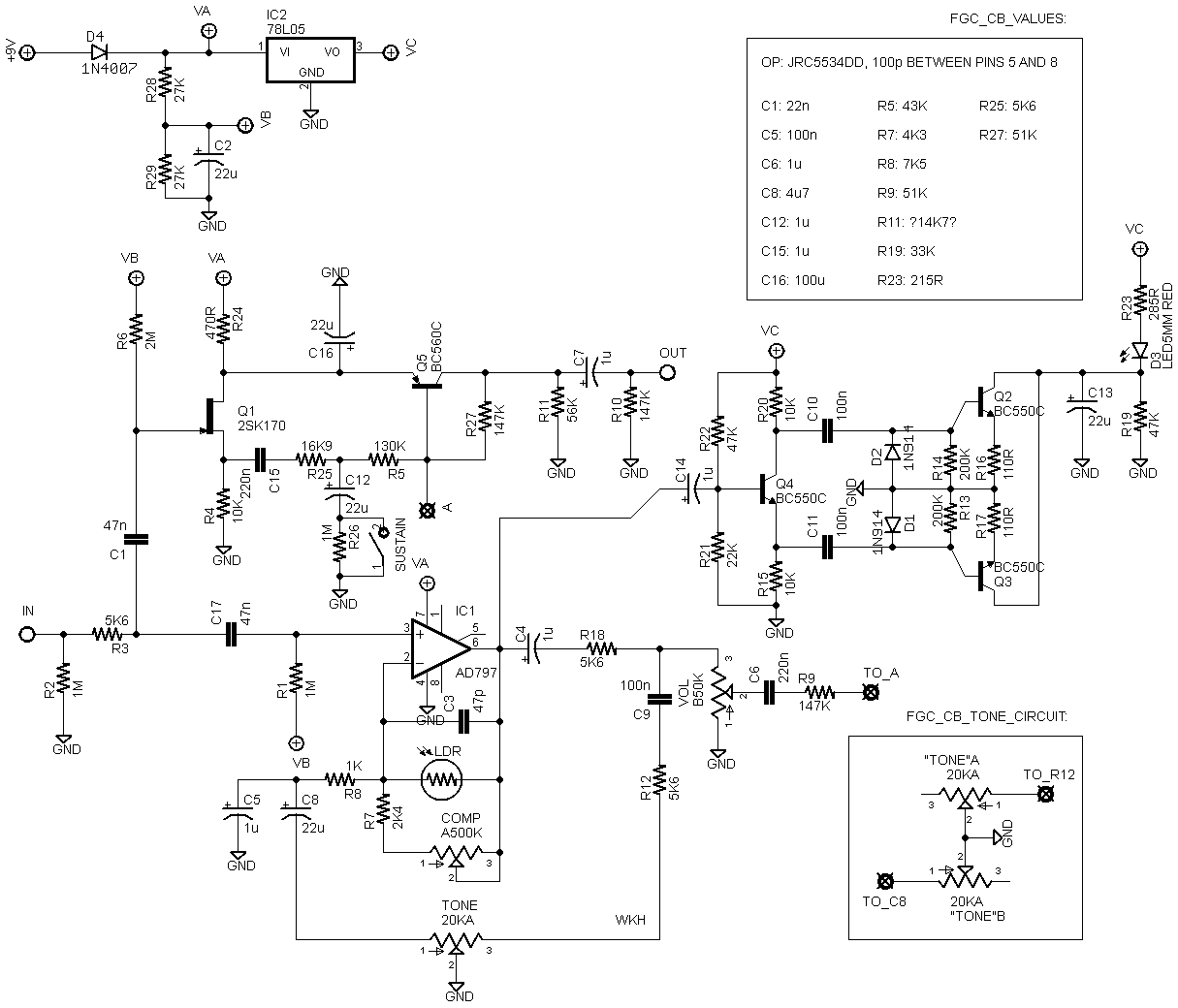 doesn't look too hard to trace

build quality look pretty good too. no stand up resistors

Donner states on bjfe.org that, contrary to the Pine Green Compressor, the Pale Green Compressor (thread title is wrong btw) can only handle 15 and not 18 volts. I wonder why? Can't be the opamp right? the NE5532 has +-15v rail-to-rail (so it handles 30v), the NE5534 is even +-18v. Are the weird small ass elkos the reason (btw, where to get them, they look cool)? mmolteratx, maybe you can specify what the caps read?
Top

Seiche wrote:Donner states on bjfe.org that, contrary to the Pine Green Compressor, the Pale Green Compressor (thread title is wrong btw) can only handle 15 and not 18 volts. I wonder why? Can't be the opamp right? the NE5532 has +-15v rail-to-rail (so it handles 30v), the NE5534 is even +-18v. Are the weird small ass elkos the reason (btw, where to get them, they look cool)? mmolteratx, maybe you can specify what the caps read?

Will do in a bit. Last few days have been busy. I'm guessing the electro caps are rated at 16V. I've gotta run to campus to pick something up and then to the PO and I should be able to get more pics and a rough trace then.
Top

My interest is in that discrete LDR - and if anything but medium levels of squash can be produced (say, your standard ross on a moderate setting, which most people think of as extreme compression). Because as posted recently elsewhere, most LDRs I've encountered are slow to respond to light and to the removal of light; if this one has a good one and can produce serious squish, I'd love a shortcut way to find a simple LDR that can be coaxed into quick (I'm talking miliseconds) response to changes in light on par with the fastest optocouplers out there and save the dough on dollars-per part optocouplers, at least while I am in the prototyping phase. But I imagine this one is just a 'decent' one that sounds just fine for those who want subtle and 'transparent' compression, for which it seems a well designed, moderate-squash, optical-based circuit (historically speaking) is most pleasing to the ear in pure audio settings, as opposed to maximum unnatural-sounding sustain or exaggerated leveling effects.

Any intention to unsolder that led/ldr pair (probably no reason to try and remove the heat shrink) and test it thoroughly?
Top

Max amount of compression available is like that of the Diamond set around halfway. Very quick attack time. No intention to unsolder anything.

are you sure it's not an NE5532? The voltage rating on that one is +-15v and if it's anything like the FGC the opamp sees the full supply voltage (v_a), doesn't it?

what I thought was that donner looked at the datasheet of the NE5532 and assumed +-15v means you can only use a 15v supply to not fry it.
are you sure it's not an NE5532?

can the LDR fry if you use too high of a supply voltage?

edit: hmm, nevermind, looking at the datasheets (NE5532, NE5534) again they seem to have the same max supply voltages of +-22v? i guess i was tired yesterday and confused it with output voltage.

Seiche wrote:hmm, i editted my post, but still weird if it's the 5534

5534 is a single op amp, not a dual. Haven't looked at the equivalent schems to see if there are any bigger differences. Haven't tried it at a higher voltage sine I don't currently have an 18V supply around.
Top

sorry everyone for my confusion. I guess it'll work, but it's not what's recommended by the manufacturer. Might still sound good

The man himself confirmed that operation at 18v is no problem.

BJF wrote:Hi,
Slight misscommunication here but yes if you have to you can run Bearfoot PGC at 18V by all means and it follows that same specifications as BJF PGC quite simply
Actually the datasheet for NE5534 states that it can be run from 6V's to 44V's in single supply.
I would also like to say that if 18V was the standard supply rather than 9V different design choices could be made.
What happens when you run PGC at 18V is simplified that influence of the compressor amplifier limitations will be lessened.
Other parts of circuit remain as far as possible the same at the expense of heat, while eventually the output voltage swing of the compressor amplifier will exceed the window in which the detector works.
There's also a limit to how wide the detection window can be without linearization of control elements rather than mere selecting, which however doesn't really matter for the circuit since the window is wide enough for the intended application.
Have fun
BJ

NE5532 = 2x NE5534, apart from two things. The NE5532 is more compensated internally, so it can be used at unity gain without problems. Hence also the decreased slew rate of 9V/µs, compared to the 13V/µs of the NE5534. If you want to use the NE5534 with gains smaller than 3, an additional compensation capacitor between the pins 1/8 has to be used. Secondly, the NE5534 is slightly lower noise.

Supply voltages don't have anything to do with it. But you might notice different maximum ratings from different manufacturers.
Top

can you perhaps measure the LDR in circuit? And then hook up a battery+resistor to the LED (e.g. via gorilla clips) and measure again? That should give us a ballpark figure, right?
Top

Actually, if you setup a simple oscillator (easy to do with a 4046 or a 40106 and 2 components), take it's output and use a resistor+passive volume control (something like a 1MEG resistor and a 500k-100k audio pot, and then maybe also sub or in series with smallish audio pot like 10k), and feed the wiper tap to the input....you can dial a variety of constant-level signals to the input of the compressor.

From there you can use your DMM to measure the resistance across the LDR as you change volume, and get an estimate of just how quick it is to respond (that part is trickier, most DMMs are not that fast)

I say use a set resistor in line that is much larger than the volume pot, since most oscillators will operate at or close to rail to rail...so if for some reason your pedal is running off less than a 9v signal (dropping diodes, dying battery, etc) but you feed the input a signal that swings greater than the op amp's rails, you can destroy the thing...so having some level of attenuation is good, and heck, I imagine most compressors aimed at the guitar/bass world are anticipating signals from the 1milivolt to maybe 3-4v (brief peak transient?) signal at the input, max.

using a steady output oscillator will make it far easier than trying to use a quickly-decaying and changing, actual guitar signal from becoming too much of a variable in trying to get the resultant LDR response...if we can dial in a change in transient signals slowly via the oscillator followed by the volume pot, the estimated readings will be that much closer to accurate. As you can see I am brainstorming a semi-scientific approach to getting measurements and all that.

Also take into account that LDRs tend to have 'memory'...if they see a bright LED stay lit for a period of time (as would be the case with, as will be the case with feeding it a consistent-level a large swing VCO signal holding it's level over a few seconds or more, an audio which is not so likely to occur in the real world of signals needing compression, or else compression would probably not be utilized, outside of the occasional use of feedback generation/amplification), that 'sustained high brightness' can effect the LDRs response to changes in light. So if someone goes about this approach, it's a good idea to give the unit a rest for a minute (should be plenty) after applying a sustained signal, apply no signal to get the LDR back to it's more typical response zone, then start again with feeding it a different signal gain from the oscillator.

^good idea but is response time actually something that is specified when buying LDRs? I know musikding doesn't (they only give the light and darkness resistance).
Top
Post Reply
52 posts