Sure, just let me know what you need. I'll leave it apart until we have a good trace.
Top

Guys, i think is time to move to dissected boutique stompboxes section.
michaelballard, please open the thread, repost the photos and take the credit. This section do not have many people looking for. In dissected section this will have more visibility imho.
Top

^ maybe a moderator will kindly move this 3D, no need to repost everything i think (?)

update: the RE is finished, i made some guesses but i'm 98% sure it's correct. i'll post the results soon
Top 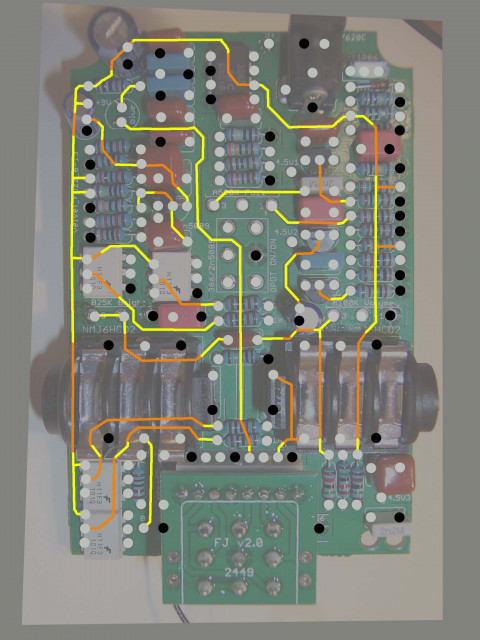 the traces in orange are my guess 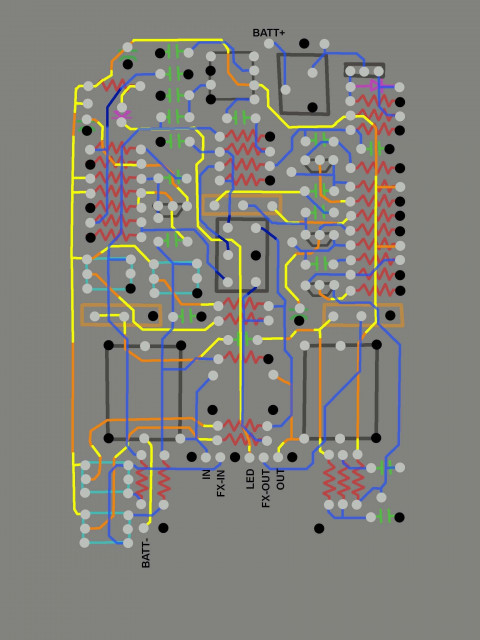 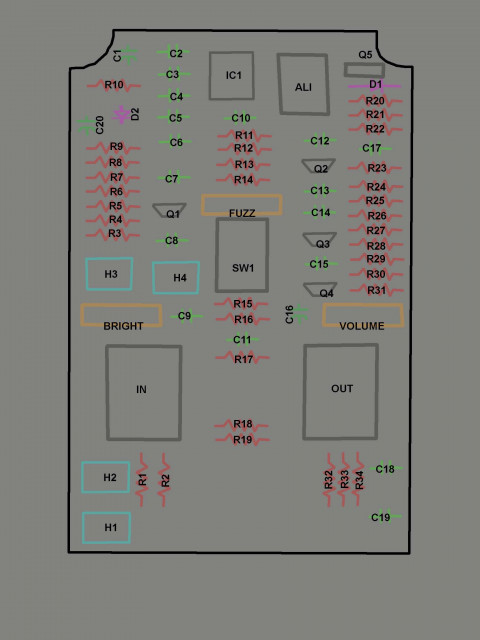 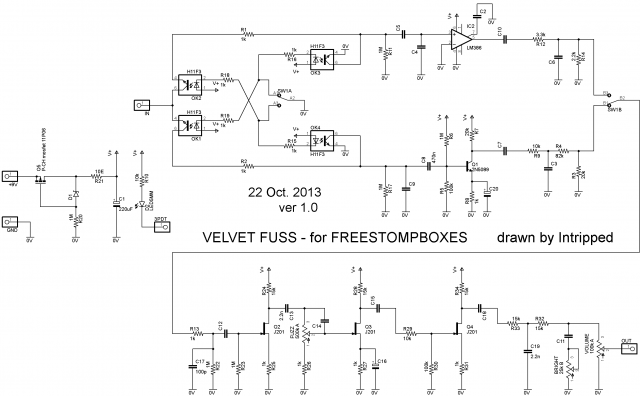 So, just cap values and JFET drain voltages needed? Excellent work, many thanks.

I'm interested in why opto-couplers were used - Presumably a DPDT switch wired to route the input either through the 386 or the 5089 would also work here?

Nice work! I'll get the cap values and drain voltages sometime in the next day or two - been a busy work week.

I'm curious about the optoFETs as well - maybe a fancy way to prevent popping when switching between the two?
Top

yes, caps values needed
and JFET drain voltages should be 4,5V as written on the PCB, but michaelballard might easily measure them.

about optocouplers, i think a 3PDT would do the trick: when one input is selected the other one is also grounded (through a further H11F3) - to prevent oscillations (?)
Probably Brian W. adopted this method in order to make the switching silent - otherwise i don't understand the additional costs/complication

michaelballard, i was writing while you posted your answer - anyway i see we agree

So the JFET section is just a standard Plexi-Drive...
Top

i think OK1 has to be mirrored, isnt the Collector Emitter path placed in the wrong direction?
Top

Eisy wrote:So the JFET section is just a standard Plexi-Drive...

Looking at the PlexiDrive schematic, the cascaded JFET stages are almost identical - except the "gain" pot is now "fuzz" and the "tone" pot is now "bright".

michaelballard wrote:Nice work! I'll get the cap values and drain voltages sometime in the next day or two - been a busy work week.

I'm curious about the optoFETs as well - maybe a fancy way to prevent popping when switching between the two?

Since there is no form of gain adjustment until after Q2, it probably makes more sense to look at both of them as boosters set to max.

You basically have a fuzz that is not adjustable as one would normally be - it's like controlling the fuzz at your amp.

That is the tricky part with these fuzz-meets-amp distortion designs. Unless you want 20 knobs and switches, there has to be a decision made as to where the gain is going to be adjustable.

I guess the only other choice would be to handle it like the Skreddy Screwdriver, giving two different points of gain adjusting. But the Screwdriver just has the mosfet input booster. This one has the choice of bipolar or power amp chip.

I think a pot for blending the 386 or bipolar might be ultimately more interesting, but would add some complexity and issues. It might also have a spectrum of mostly less than dramatic settings for the average user.

The best part with this pedal is the simplicity - both the bipolar and the power amp are really quite basic booster stages. Brilliant. Someone said the amp/FET part is the Plexi Drive pedal? As in without alterations? Double brilliant, even if it required just modest alterations.

I'm surprised no one has thought of doing what looks somewhat obvious to me - make a simple bipolar and 386 boost pedal to cascade into the front of a plexi-type or other FET-type pedal of your choice. You could knock that out on vero in an hour or less. You wouldn't have to bother sorting FET's (or sourcing them) for a pedal you may already have. And if you only use tight or loose, the complexity drops by half.

Thanks for all your data and pics.

Intripped - thanks for your rapid trace of the circuit. Take a bow.
”Sex is great - but you can’t beat the real thing !” - The Wanker’s Handbook
Top

If we're good with the trace, I'm gonna put this thing back together and grab drain voltages - although I'm sure they're 4.5v since that "amp" stage is a PlexiDrive.
Top

Thanks again to eveyone involved in tracing this out, fired up on the breadboard first time. Works great with a 3PDT switching the inputs and grounding the opposite one, maybe the optoFETs impart even more sonic mojo but it sounds really good anyway.

I'd be straight onto making a vero right now if my ancient version of diylc hadn't gone wonky a few weeks ago. Maybe I'll get it sorted by the weekend.

getting a final working schematic (with a solution h11f3less) i do a 1590b board layout.
Top

Nice work guys ! makes me think I'll try a plexi drive and put that boost in front of it to have both !
Top

OK, here's a first go at a vero layout. I've been over it a fair few times, but there may well still be errors. I'll be building it tonight, so I should be able to verify it (or not...) by tomorrow.

I've replaced the optoFET fuzz mode switching with a 3PDT that grounds the input to the unused fuzz section, and I've added a DPDT switch to bypass the fuzz altogether for a pretty much stock plexidrive (as suggested by okgb above - It works well on the breadboard).

I also omitted the power protection, cos i don't worry about that stuff. It strikes me that a 4P3T rotary switch might be the most elegant way to have the choice of plexidrive/fat fuzz/tight fuzz, all on one control. The pedal would then have what looked like four knobs and no switches (much nicer IMO).

Just checking if I understand correctly ,on comparing the plexi drive schematic with the one Intreppid posted the fuzz pot is just the gain pot renamed ? Does this then mean that with the fuzz part switched off it will function as a normal plexi drive. I've already built the plexi and love it , but it would be great to be able to have both pedals in one , maybe even have the fuzz on a foot switch.
Top

Yep, the input stages (the 386/2N5089) just slam the input of the plexi section to get the fuzz sound. You could just trim off everything below 'row i' and leave off everything to the right of the cut at i8 to build the input/fuzz stages.