All about modern commercial stompbox circuits from Electro Harmonix over MXR, Boss and Ibanez into the nineties.
Post Reply
69 posts

Hi. Greetings from Russia. Its a great forum you have there.
I've tried to build that phaser for a long time. It works now somehow, but the output of the effect is very low. Amplitude of the output is 4 times smaller then input. What might be tweaked to make it sound louder? I've used shematics in the attachment. 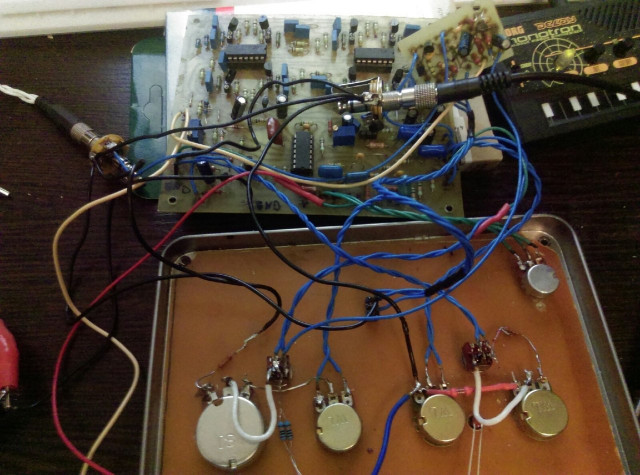 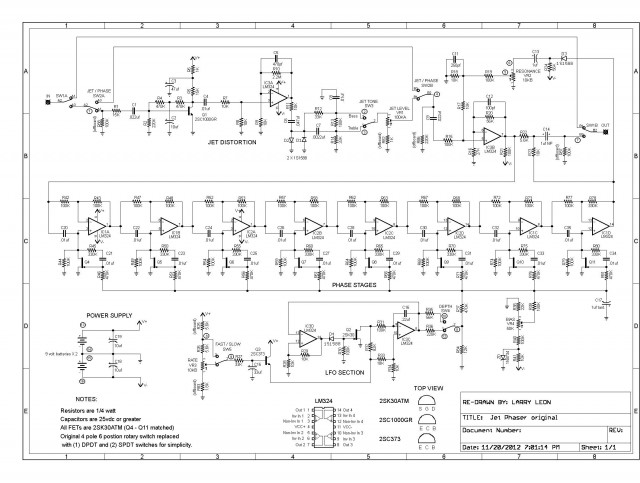 Hi and welcome to the forum,

you're asking what to tweak to make it sound louder.... well actually, the phaser part has a low input impedance, then, if you're connecting it to a high impedance source, like guitar or bass, it should "dull" your sound with a slight volume loss. I'd add a small buffer (just a FET or BJT stage) in front of it.

IC3b and IC1d have a gain ~3 which should recover any loss in the passive output mixer...
So I would say: there's nothing to tweak... check for resistors values, solder joints or eventual short or track cut (assuming your PCB is correct...)
Top

I don't have time right now to get more measurements, but I did make sure each get was securely tested.

Q5 seems to be the only one "off" of the groups value(s).

I'll recheck this week if I have time.
Skyline FX 2013
Top

Fantastic!! Thanks for doing that, this is really helpful.

The values marked "off" in the list - that should instead be the 10k setting on the tester, right? (they look pretty close to what I would expect for 10k, so just want to confirm)

The "M" setting on the tester is sort of a substitute for getting the true Vgs(off) value of the JFET. It uses the multimeter's internal resistance, which is usually around 10M. So it's very, very close to the true Vgs(off) value, probably within a few millivolts, but is technically more accurately called Vgs(10M) or just Vgs(M).

Q5 is a bit farther out of line from the others on the Vgs(10k) value, but still would probably work fine and is most likely correct. I have a '79 Phase 90 with all JFETs within 0.1V and it sounds great. A spread of 0.18V for the AP-7 is a bit wider than that, and if I was making one I'd want them to be tighter, but hard to argue with the manufacturer on what's acceptable

I guess the spread could be worse! But basically any decent modern fet would suffice? 2N5457 or something like that? I have to check the pdf's.
Skyline FX 2013
Top

chicago_mike wrote:But basically any decent modern fet would suffice? 2N5457 or something like that?

I would have thought so. But there were some people on DIYSB who had issues building it (this thread and this one) and it seems to be related to the JFETs. So I am wondering whether there's a characteristic of the AP-7 that needs a lower Vgs(10k) than something like a Phase 90, which is really a pretty similar design overall.

The other aspect of this is that the 2SK30A-GR is the next 'bucket' higher in Vgs(10k) and pretty closely matches the ones used in the Phase 90. So if Roland intentionally uses the Y (yellow) version, that seems like a clue that they need to be lower Vgs(10k) than the P90.

It could almost certainly be adapted to use the same type of JFETs as the P90 since the topology is basically the same for the LFO and voltage trimmer and it's mainly just the values that are different. But I'm betting it would lose some of its character.
Aion Electronics - DIY PCB projects for classic and obscure circuits
Top

I remember reading some builders had issues with the sweep range. Either bottoming out or not getting the full sweep.

I keep thinking that could be fixed if I can get measurements while the pedal is operational, but I would want to know what to measure.
Skyline FX 2013
Top
Post Reply
69 posts