Here's a pdf book containing three version of Ormond Sparks articles on electric guitars as published in Practical Mechanics in 1937. The article was reworked in 1943 and then republished in 1953... 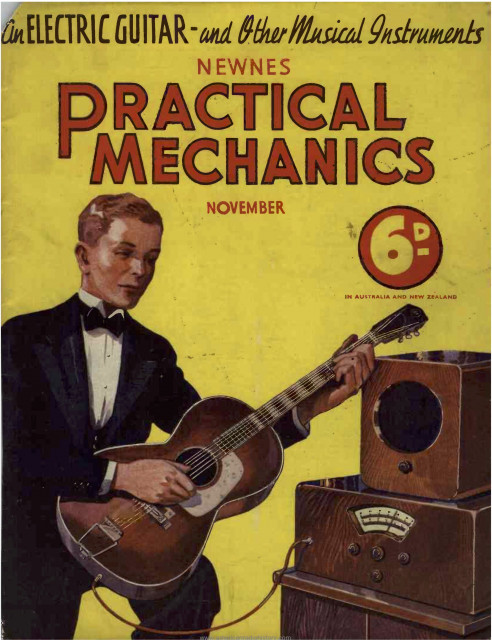 amazing
be kind to all animals - especially human beings
Top

I found a little flint of information about Leslie Ormond Sparks on the vintage-radio.net forum:

I worked for that gentleman at Harmans Cross in Dorset as an apprentice for a year until his death. A wonderful character.
We produced a wide range of kits - mostly TRF and some were live-chassis! Not really the sort of thing to give to a first-time constructor. Happy days winding little Denco coils. Incidently, both our Christian names were Leslie, hence we became L1 & L2.
Sadly, I never retained any of the data sheets, although I still use a couple of small tools which came from his workshop! Incidently, L.O.Sparkes orginally operated from Neasden and "downsized" his business and carried on from a large shed in his back garden at Harmans Cross. He was one of the old school and knew most of the famous name in the radio business.
It was my very first job in 1958 on leaving school at 15 - sadly he died a year later leaving his widow and myself to close down the business, after which I had to start another apprenticeship. We had just started to investigate transistors and I recall him getting a free sample of the revolutionary OC44 and OC45 devices from Mr. Mullard!

Thanks for sharing these wonderful articles on L Ormond Sparks.
Top
Post Reply
4 posts • Page 1 of 1