Discussion regarding early stompbox technology: 1960-1975 Please keep discussion focused and contribute what info you have...
Post Reply
10 posts • Page 1 of 1

I know this one sounds very nice! 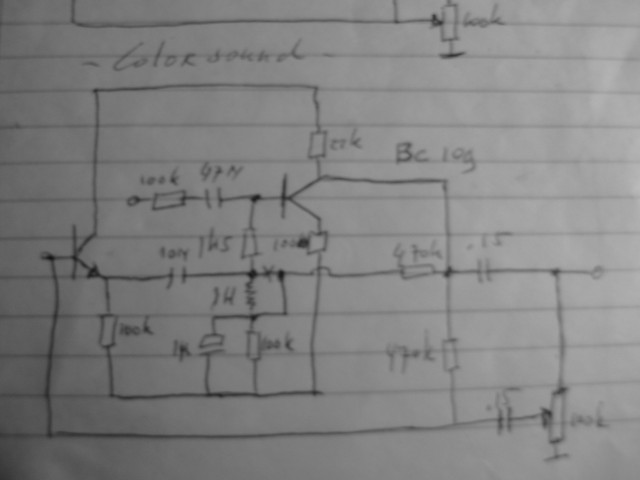 Actually the schematic is for an inductor'ed wah whereas the layout is for a Inductorless wah.

The schematic posted for the inductor'ed wah has a 100 ohm in the emitter. As far as I know
that happened on Issue 5 or Issue 6 circuits and after which were in the 80's

The other difference is the caps are 150n. I don't know enough to comment but it could
be Issue 6 or later.

The emitter resistor on the left-most transistor is likely to be 10k not 100k.
Top

How many have actually visited Macari's Music Exchange shop in London, or even their short lived shop in Edgware during the mid 1960s?
Top

I just attached the linked schematic to the post

The layout seems to correspond to this schematic:
http://beavisaudio.com/Projects/ColorsoundWah/index.htm

This seems to be the guts of the Colorsound inductorless wah:
https://www.worthpoint.com/worthopedia/ ... -288324289

Strangely familiar to the only pedal that even Discofreq doesn't feature: Cactus Wah Wah
viewtopic.php?t=21771

Thanks Ringworm, I've been digging through some stuff and intended on re-posting your pics today but you already did it.

The most complete and accurate account of a schematic is this one, with the addition of the BC549C transistor which you can see from Ringworm's pics. The BC549C is consistent with builds from the UK.

The thing to note is the base-collector resistor is 3M3. The schematic with the resistor at 5M7 and the 2N5088 transistor does not represent the pedal. You can see the 3M3 resistor on the Korean board. In Ringworms pics it's hard to tell if it's 2M2 or 3M3.

There's not a lot of info on these unit. As far as I could see there's a big dip in info on Colorsound products between mid 80's and 1994. At which point Macaris started to sell "ReIssues". From what I can see "ReIssues" didn't always means clones. Dick Denney was somehow involved in some of the products in this era. He apparently designed the inductorless wah so I assumed the inductorless wah appear as a result of this work.

At the same time the Colorsound inductored wah seemed to have disappeared in the dip between mid 80's and 1994.
Top

I want to make a PCB clone, what are the dimensions of the board?
Top

Sorry, I don't have the board anymore, just the pics I took from back when I did. You could maybe estimate from the pitch of the resistors and caps which I think was about 10mm, so approx 3cm x 7cm.
Top

ringworm wrote: ↑12 Oct 2021, 21:14 Sorry, I don't have the board anymore, just the pics I took from back when I did. You could maybe estimate from the pitch of the resistors and caps which I think was about 10mm, so approx 3cm x 7cm.