Have a look here for general information about the forum, rules and announcements.
Post Reply
237 posts

Can you add a dark theme, thanks.
Top

Frank Triggs wrote: ↑22 May 2021, 12:18 YouTube link in profile is wrong. My YouTube does NOT have a user/ prefix, it has only a channel/ prefix, before my YouTube channel.


You stumbled on an old part of the forum software and this is the first time I gave it any thought. Actually not only me - until now, nobody used it. Which was good because I could update the field to the new YouTube channel URL syntax without affecting anyone else. From now on the profile YouTube field will need the channel ID, instead of the legacy channel username which newer channels do not have anymore. So no full or partial URL, only the ID.

The current theme (or "style" in phpBB lingo) carries a heavy technical debt because of its age. So - IMO - rather than add a dark theme to it, it would be way more feasible to make a new style from the scratch. Which I did start a while ago, but it will take a while to reach a usable form. It is a lot of work to make it behave in a fresh phpBB install and more so to make it friends with the various extensions in use. To complicate things, phpBB 4.0 is in the works since 2016 - and that includes a new official style which is supposed to be modern. They managed to get to an alpha version this year, so all the work may be for an already obsolete base.

So, sorry, not anytime soon, but do not give up hope yet.
Top

I'm unable to search for terms like "BOSS OD-3" , it will now ignore the "OD-3" part in advanced search.
Top

Hi there, yes, this is an issue. The forum software allows us to setup which words get indexed. Turning the number from 3 down to 2 will require the engines to also index each occurrence of words like 'an,' 'of,' 'us,' etc...

What we should do from now on at least, is omit al hyphenation in names: Boss ODS3...

Thanks for the feedback, sorry took so long to reply.
Please, support freestompboxes.org on Patreon for just 1 pcb per year! Or donate directly through PayPal
Top

The problem is that MySQL uses hyphens (and everything else, except alphanumerics and the underscore, for that matter) as delimiters. So when you search "dsc-20m", it breaks it in two chunks - "dsc" and "20m", then searches for posts containing both of them. Which seems a good enough solution until any of the chunks is shorter than the lower limit (3 as modman said), when it gets ignored by the search. Lowering the threshold to 2 would not work because many of the terms contain only a single digit after the hyphen.
The solution would be to make the search consider hyphens as word characters instead of delimiters. One way would be recompiling MySQL - a monumental rabbit hole, maintenance-wise. Another one would be creating a new collation to be used by the post text column in the database, but gets complicated because we're using a complicated character set (UTF-8) which requires complicated configuration (didn't give up on this one, yet). And yet another way would be to use Sphinx Search (an external search server). Which would have better performance, but seems to me an even more monumental rabbit hole, maintenance-wise.

I don't think that removing hyphens from now on would do much good: we already have a lot of content containing hyphens, it is difficult to make members to follow much simpler rules and the original names do contain hyphens. Clearly, this is Boss-Roland's fault

As a side note, we're using the MySQL native fulltext search because it seems the best compromise between maintenance and storage needs, performance and results.
Top

When viewing unread posts and checking marked read, they stay unread and I don't get the actual posts that are unread, this seems to have been happening for awhile now.
Top

Sorry for the delay, I went looking at the code for that particular feature and forgot what was I doing (oooh, shiny!). It works for me on Linux/Firefox and Android/Firefox, before and after installing privacy addons like uBlock Origin and Privacy Badger. Seems to be caused by something in your environment. Try clearing the browser memory.
Top

I just have to go manually check those posts, then refresh, and the new stuff shows up. I already tried clearing history.
Top 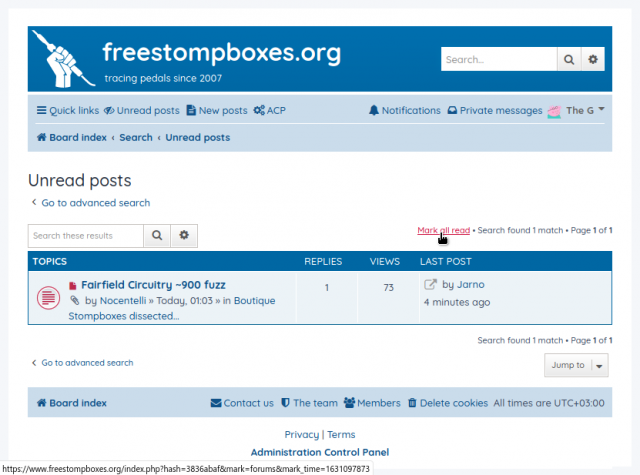 Well, that's a link, meaning that it asks the server for a new page, which it obliges after it performs the marking: 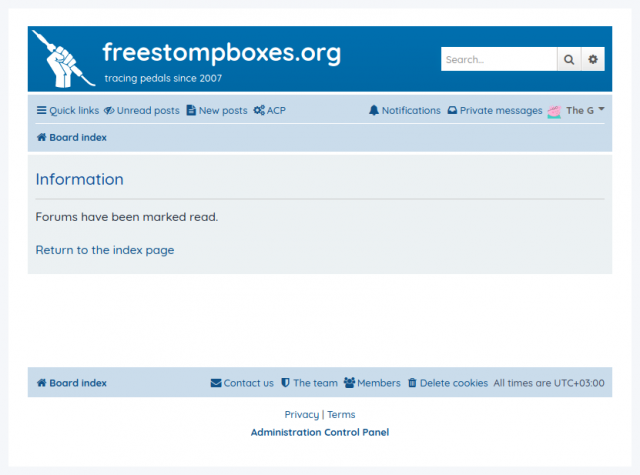 So no refresh needed, as is the case with any link that goes to another page.

Then it reloads the homepage: 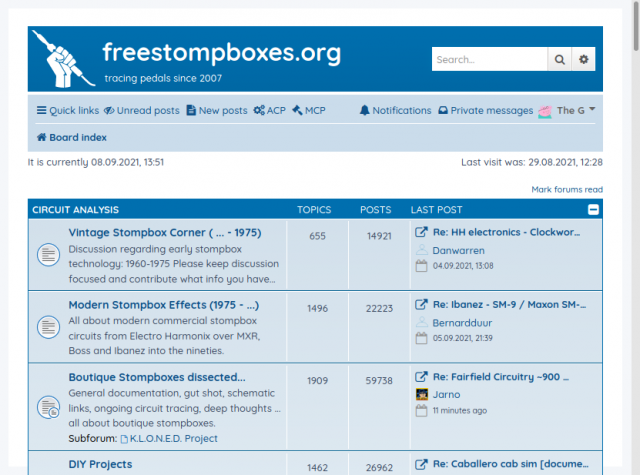 That should be the way it goes. I understood that in your case nothing happens when you click on the "Mark all read" link. If you copy the link address and open it in a new tab, does it do anything?
Top

Pressing the mark all read sometimes doesn't work at all, they remain "unread", sometimes even going and reading the posts doesn't mark them read. Very odd.

The problem seems to occur when I use the "mark all read" button, or "mark subforum read" button.
Top

Its permanently broken now for days, cannot make it work. New posts are never cleared when I look at them, pressing mark all read doesn't work. :/
Top

It's like any debugging - maybe if you'd tell more about your environment (operating system, browser, device, versions, and so on) we could do more about it. An unreproducible problem is hardly solvable.
Top

I've now marked all read myself, let's check again tomorrow, but for now it seems to work for me.
Even with a Macbook running Safari...
Please, support freestompboxes.org on Patreon for just 1 pcb per year! Or donate directly through PayPal
Top

I'm on many forums which use the same software and there's no issue, I think my forum uses it (I'm not the maintainer tho).
Top

One fundamental difference between Google's search and the one on our forum is this: Google returns links to pages, the search on FSB returns links to either posts or topics. We have more posts than pages, and more pages than topics. At most, Google will index all the pages from the dedicated topics, plus the ones not-dedicated-but-containing-"BOSS OD-3", if any. Then the Google AI will think about relevance, duplicate content, and so on.
Also, keep in mind that quoting the expression will make the search to look for that exact expression and disregard pages containing only one of the words.
On the other hand, it makes the search account for the "OD-3" part.
Top
Post Reply
237 posts

Return to “Announcements and Forum Rules”