Thaxt wrote:I think the 1N34A diodes - or the OA-90s - weaken this pedal's sound when they are direct to ground; the AMZ warp mod - placing a 10 K pot between diodes & ground - seems a key to getting both better volume & fuzz texture.

I've tried the stock configuration, & it does come off as way too weak...hissy & fuzzy, but (IMO) not a strong fuzz.

LED's as subs do tend to hit pretty hard, but the usual other diode subs can do wonders, & bring out the UVSF's innate, characteristic sounds.

Modding the midscoop is key too. Modding those 2 things can get you a whole 'nuther Superfuzz, meaning: in a good way.

The (overly?) scooped, meek & fizzy can become: WOW! The scoop is great for bass tho.

and that's pretty much what I did for my superfuzz build

and it's been on my pedalboard around 3 years now, love this thing

I designed a PCB layout with @derringer’s mods. Works well sounds amazing. I had boards manufactured at PCBWay.com. Here’s my build. I milled this black powder coated enclosure. I had a few troubles getting the settings right I was trying a new bit.

. Was able get it working by putting C6 on the backside and bending the leads to make the proper connection.

The trimmers add a ranger sound that’s a nice bonus feature to have. 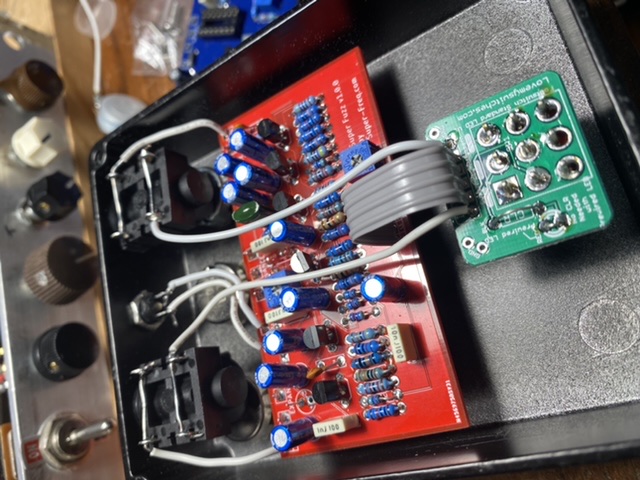 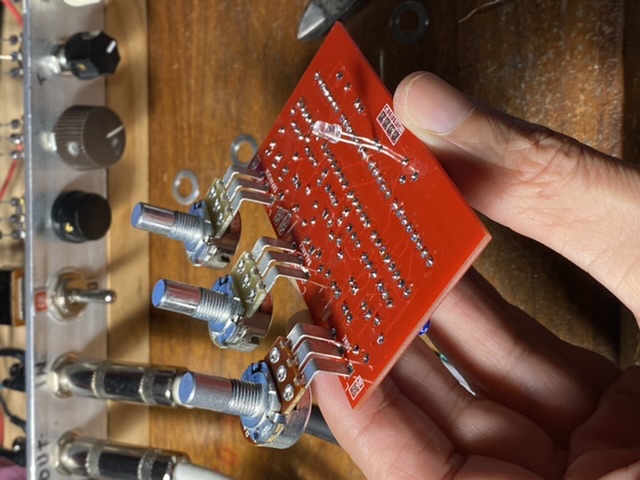 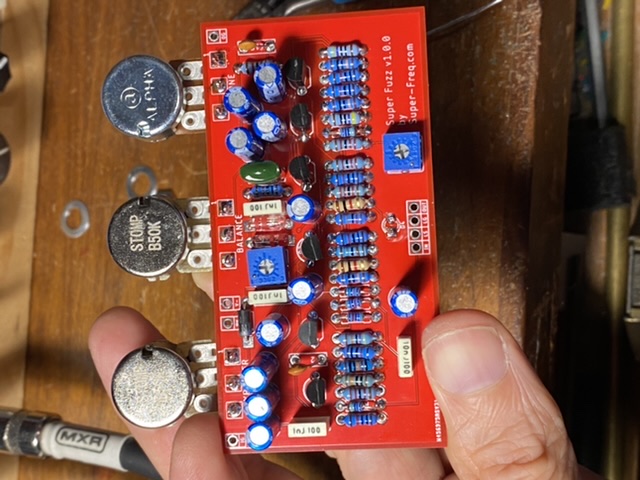 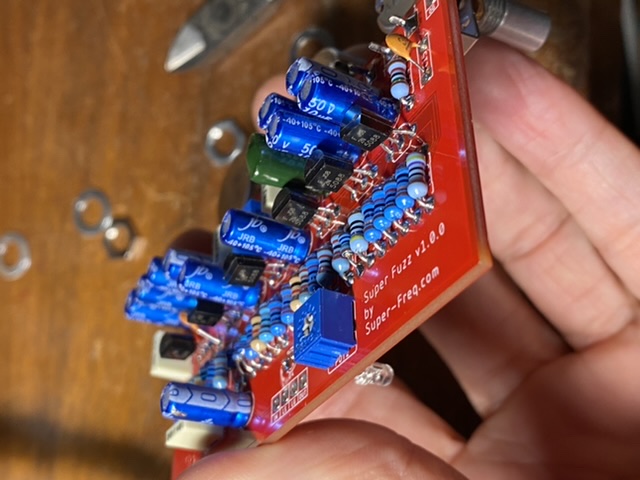 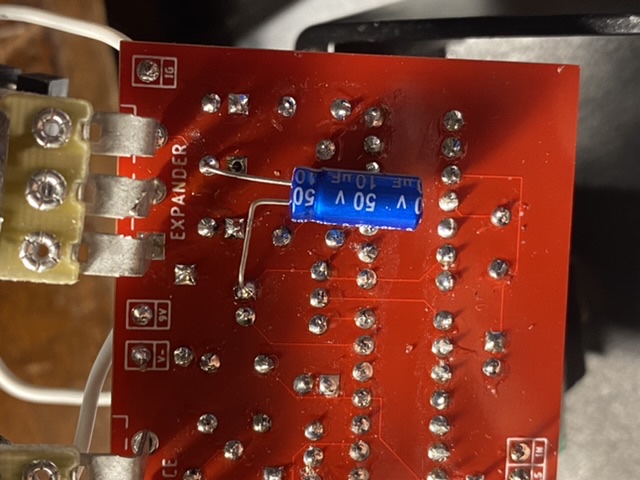 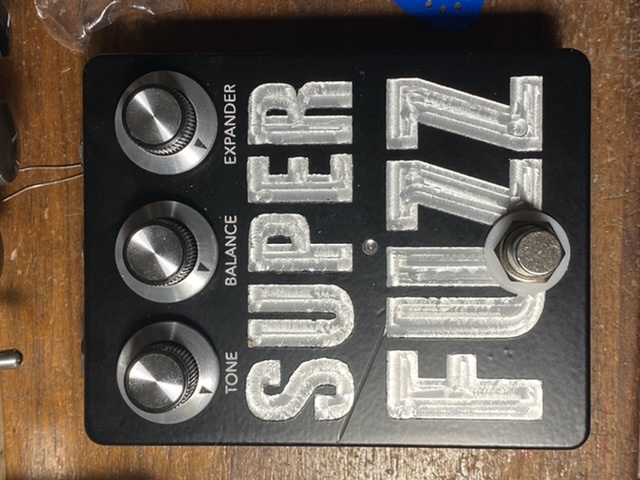 Awesome thread!
I own a black and gray super-fuzz original and i love it. I want to build this for sure and keep original in good condition.
I have some 2sc945 transistors.
They have similar specs to the originals. They are npn BCE layout.

Anybody try these before?
Any insight would be greatly appreciated.

It's a slightly different schematic the mods can be applied to. The 2nf cap sounds better in the pre-amp/buffer to me. This part of the circuit could be designed better tbh.

You can turn the tone control into a big muff control easily, I prefer the sound of that rather than the mids control, or have both and eliminate the tone switch altogether. Having the balance of the octave circuit on a control is also nice to have a texture control. I prefer the 10K pot in series between the 10uf and the diodes. Both the fuzz and balance controls can be 100K for more gain. 10uf are also completely overkill, 1uf-2.2uf will do. You can replace the 1.8k resistor also in the differential pair with a 2K pot and hook the bypass cap to the wiper for an additional control of the overall fuzz effect and is probably better than than the expander control which could be eliminated.
Top

Adding the octave trimpot is just what I needed. It could just be a matter of taste as I had a matched pair in the octave section, but putting it a little off center sounded best to me with heavier sustain.

I looked at the Watson Superfuzz clones, both the vintage looking FY-6 and the EFY-6 (with tone pot) and while they have the 10k trimmer, the 22ks are replaced with 15ks.
The manual with schematic states:

https://www.analoguehaven.com/wattsoncl ... manual.pdf
"In the original Shin-ei and early Univox pedals, both transistors in the octave circuit were balanced. Univox later added a trimmer resistor, which allowed the octave circuit to be intentionally unbalanced, making a variety of tone variations possible. Unfortunately, the extra resistance from the trimmer changed the bias of the octave circuit, and also changed it's tone. For this reason, it's common to find some of these later pedals with the trimmer removed, and jumper wires installed.

I'm in the midst of designing my own version of this pedal, I've reduced the value of the trim as I noticed similar bias issues, it doesn't need to be 10k anyway.

I'm taking a slightly different approach to the input stage as this one is pretty good but the impedance could be better. I love the sound of this fuzz but I want a bit better controls for more variation.
Top

What do you think of the Ibanez Standard WAU Fuzz, with the different first stage?

The FET is going to have higher input impedance but less gain than the shunt feedback stage, the 2nd stage here is different too as the negative feedback will sound more compressed with a lot of gain, more big muff like which you may prefer. I'm bread boarding some mods to the input stage to increase impedance via bootstrapping but still also having the shunt feedback to increase gain. The Kay Fuzz is also the same circuit but with an even more simplified input stage to keep it to 4 transistors.
Top

Thanks for the information. It sounds like the Ibanez will be different enough for me to try as I like the Superfuzz thing. I also made the Ace Tone FM-2

I have, I repaired one about a year ago. I was not a fan tbh, its kinda thin sounding. Sorta like the Joyo and other chinese clones of the Foxx Tone Machine which is also super similar to this. They sound very very thin compared to a real one.
Top

WooHoo!
I made a super fuzz circuit and it works! This is my first time building my own pedal so I'm excited!
I used the pedalpcb.com super fuzz board and switch breakout board.
the rest is just stuff I've collected.
I love my original super fuzz so im glad i could make something to use and keep the original from getting torn up.
It sounds really close!
My original has SC536-F6F transistors and two extremely large and well matched diodes at .290 Vf.
I used SC945 transistors and a couple 1N34 doides. One at .305 Vf and one at .287 Vf.
The only hardware change im gonna make if i can get it to work is a dpdt toggle that is on/on/on configured.
Wired correctly, it should give me a "both" tone setting in the middle.
Thought i would try it as haven't seen anybody try it yet and it is a way to get a middle ground tone setting withour adding or modifying resistance to the tone circuits.

I have learned a lot reading on this forum and i am having fun!