Forum dedicated to helping people debug and troubleshoot non-functional pedals or builds. Please use an clear and informative title, indicating circuit and basic problem. Don't forget to mark the issue as fixed if this is the case.
Post Reply
3 posts • Page 1 of 1

I was having issues with a parallel looper design and asked for advice a while back to help eliminate switch popping and circuit noise. The attached file [SCHEMATIC_Version1] shows a pop-free version; the switch popping finally disappeared after removing all pulldown resistors. The guitar signal was too quiet, though, and the circuit had a high noise floor. Although the schematic doesn't show it, I was using a voltage doubler.
The second file [SCHEMATIC_Version2] was a redesign using lower noise op amps and other changes. The switching itself remained the same. This version has switch popping issues.
The pulldown resistors at input/output/4PDT lug 4 were added later to try to eliminate the popping but didn't help. I tried lug 6 to Vref as in Version 1 but it didn't help. The LED being removed doesn't help either. I lowered all capacitors in the audio path to 100n to temporarily hear what that did when switching the 4PDT and SPDT(Tails) on and off. There was still a significant pop when either were turned to the on position.
I should note that I used an audio probe to determine that there is *almost* no pop going through the sends, mostly through the circuit output and output jack. I added a 100n capacitor after lug 2 (not shown) and this reduced the pop when switching the 4PDT to the off position.
If there's anything else worth trying, I'd appreciate any suggestions! 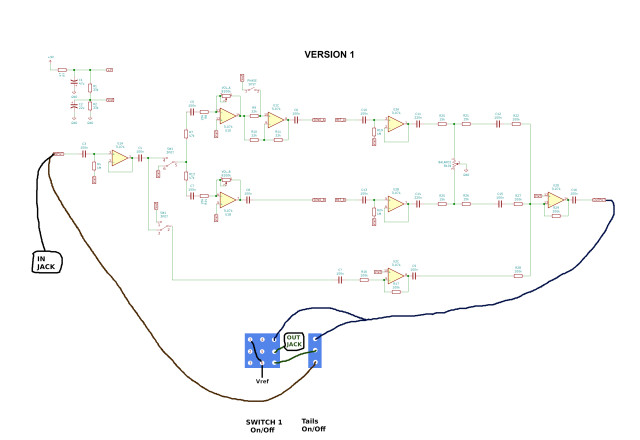 Random thoughts: Are you testing it with (1) other pedals in the send/return loops, or (2) nothing connected to send/return jacks, or (3) send A patched to return A, and send B patched to return B? Have you tried adding pulldown resistors to the send/return signal leads? Have you considered ventriloquism, wherein the amp or another pedal has a DC bias that makes this pedal seem to be the culprit? I have an amp that does that, every pedal connected to it pops, but none of the pedals pop with other amps.
Top

One more thought: instead of doubling +9V to ~+18V and then dividing it, what about inverting +9V to -9V and using ground for your op amp reference? All the same to the op amps (18V between V+ and V- either way), same headroom, and it simplifies your power section.

And I just noticed you have both U3B and U4B biased to Vref in version 2, with DC continuity between them. Did you mean to split R30 and R31 with a cap?
Top
Post Reply
3 posts • Page 1 of 1