Here's a trace of a J. Rockett Tim Pierce signature OD that I had on hand. It's a dual pedal with a four-knob OD followed by a MOSFET "power amp" boost. This PCB is stenciled rev 5 and the pedal dates from 2015. This post is mostly for curiosity's sake since I couldn't find an existing trace. It's a decent but not spectacular pedal and there's nothing innovative inside. 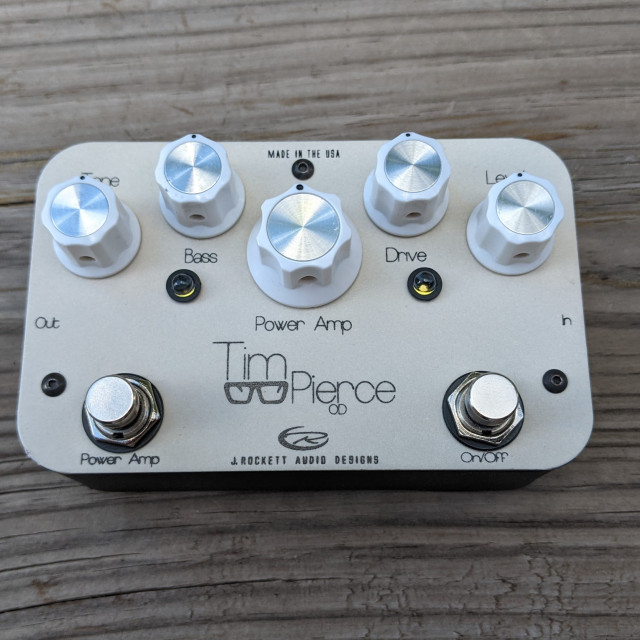 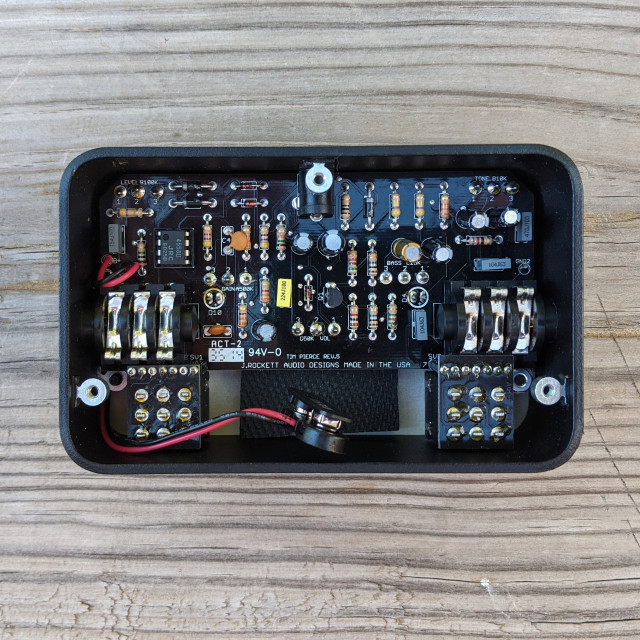 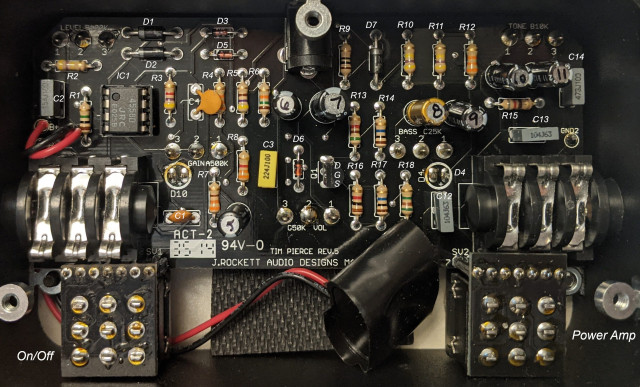 The most interesting thing about the OD side is that is uses just half of a dual op amp, and leaves the other half unterminated. Maximum OD gain measured on the bench is just over 16 dB, and it symmetrically peaks the waveform as the gain is increased. The Tone (treble) and Bass pots have a pleasant response.

The "power amp" side is advertised as emulating the power amp section of a Naylor Super-Drive 60. It's a stock BS170 MOSFET boost, much like the AMZ MOSFET or the EQD Black Eye but less flexible, with a fixed gain measuring about 12 dB on the bench. You can get either clean or distorted outputs by varying the input level to the boost. As you increase the input level, the boost clips off the top of the waveform and peaks the bottom. I don't have an SD60 so I can't say if it sounds similar.

Both sides seem to be designed for input signals at the level of a guitar pickup (< 500 mV) rather than from another OD or boost pedal in front. Which makes sense if Tim asked Rockett for a pedal to use in the studio with just a guitar in front of it. With higher input levels, the OD side just limits the output with the same waveform, while the boost side increases distortion. Maximum gain with both sides in series is ~25 dB on the bench.

Bypass switching is true bypass for each side, with the OD wired first ("On/Off") and boost wired second ("Power Amp") in an "either or both" configuration. Current draw @ 9V is 3.5 mA max with both sides active.
Top

The most interesting thing about the OD side is that is uses just half of a dual op amp, and leaves the other half unterminated.

I think there is no single op-amp that has the same characteristics as the JRC4558DD type.
Top

What surprised me was not terminating the unused half. What Rockett did is shown in figure A below, quoting from Analog Devices application note # 1957: A. This is the worst thing to do with an uncommitted op amp. Both inputs are floating and will pick up noise and the output may switch from rail to rail unpredictably. This configuration will draw varying amounts of supply current and will couple noise into the other op amps and may add noise to the power and ground traces.

The best use of that remaining opamp would have been to have a more stable reference voltage, IMHO

Is it something very different from having put the four diodes of the same type ?

Its possible the traces on the op amp are terminated underneath the socket as it is a double sided board. Did you check them with a multimeter?
Top

CheapPedalCollector wrote: ↑23 Sep 2022, 00:07 Its possible the traces on the op amp are terminated underneath the socket as it is a double sided board. Did you check them with a multimeter?

Double sided board with traces visible on both sides, although under a black top layer. I was skeptical too, so I removed the IC from the socket and checked each pin on the socket with a meter. Pins 5, 6 & 7 were completely unterminated.