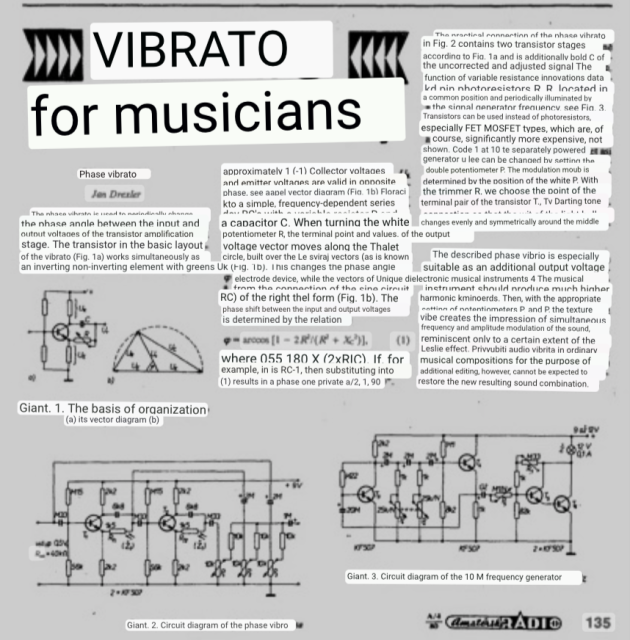 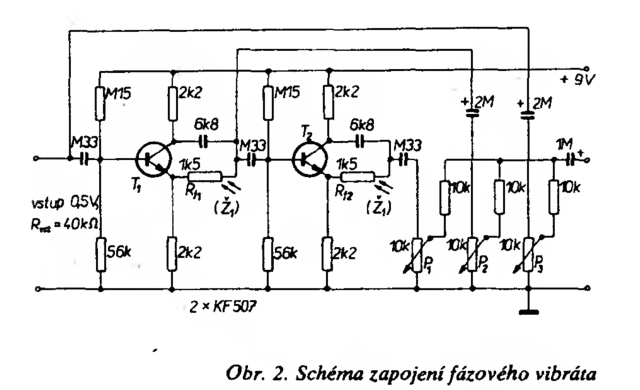 The phase vibrato is used to periodically change
the phase angle between the input and
output voltages of the transistor amplification
stage. The transistor in the basic layout
of the vibrato (Fig. 1a) works simultaneously as
an inverting non-inverting element with greens Uk (Fig. 1b). This changes the phase angle
approximately 1 (-1) Collector voltages
and emitter voltages are valid in opposite
phase, see aapel vector diagram (Fig. 1b) Floraci
kto a simple, frequency-dependent series
day RC's with a variable resistor R and
a capacitor C. When turning the white
potentiometer R, the terminal point and values. of the output
voltage vector moves along the Thalet
circle, built over the Le sviraj vectors (as is known
from the connection of the sine circuit
RC) of the right thel form (Fig. 1b). The
phase shift between the input and output voltages
is determined by the relation
arccos [1-2R/R+ x)].
where 055 180 X (2xRIC). If, for
example, in is RC-1, then substituting into
(1) results in a phase one private a/2, 1, 90
Giant. 1. The basis of organization
(a) its vector diagram (b)
The practical connection of the phase vibrato
in Fig. 2 contains two transistor stages
according to Fig. 1a and is additionally bold C of
the uncorrected and adjusted signal The
function of variable resistance innovations data
kd pin photoresistors R, R. located in
a common position and periodically illuminated by
the signal generator frequency, see Fig. 3.
Transistors can be used instead of photoresistors,
especially FET MOSFET types, which are, of
course, significantly more expensive, not
shown. Code 1 at 10 te separately powered
generator u lee can be changed by setting the
double potentiometer P. The modulation moub is
determined by the position of the white P. With
the trimmer R, we choose the point of the
terminal pair of the transistor T., Tv Darting tone
connection so that the wit of the light bulb
changes evenly and symmetrically around the middle
The described phase vibrio is especially
suitable as an additional output voltage
electrode device, while the vectors of Unique dielectronic musical instruments 4 The musical
instrument should produce much higher
harmonic kminoerds. Then, with the appropriate
setting of potentiometers P. and P, the texture
vibe creates the impression of simultaneous
frequency and amplitude modulation of the sound,
reminiscent only to a certain extent of the
Leslie effect. Privyubiti audio vibrita in ordinary
musical compositions for the purpose of
additional editing, however, cannot be expected to
restore the new resulting sound combination.
(1)
R
Giant. 2. Circuit diagram of the phase vibro
Giant. 3. Circuit diagram of the 10 M frequency generator
135
Please, support freestompboxes.org on Patreon for just 1 pcb per year! Or donate directly through PayPal
Top

Is it me or does this look like basically a 2 stage uni vibe?
Top

There's a similarity for sure but that's optical phasing with transistors...

Here's the lfo close up. 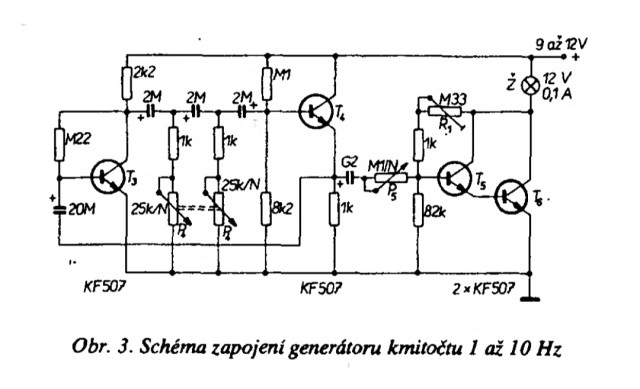 I don't have much experience with Eastern Block schematics.

Also what is the value of P5. It says M1/N, is that a100k?
"Just because the forgoing circuits have produced results there is no reason experimenting won't lead to added results." L. E. Darling, in his article containing the earliest published vacuum tube synthesizer circuit, Popular Science Jan 1920
Top

linear potentiometers (indicated by the letter B, formerly N)

logarithmic potentiometers (marked with the letter A, formerly G).