Bernardduur wrote:Schematic can be found on the page Boris added!

that is the reason why I did that

does enybody have the real thing?...those sound clips are not so special...? or I am mistaking?
Top

Those soundclips aren't the best are they but I always hear good things about this box...
I'm hoping now there's the reissue's out some people will post some new youtube demos of it because I still haven't quite found a phaser I really like so I have high hopes for this one.
Top

Scruffie wrote:Those soundclips aren't the best are they but I always hear good things about this box...
I'm hoping now there's the reissue's out some people will post some new youtube demos of it because I still haven't quite found a phaser I really like so I have high hopes for this one.

it doesn't sound as "standard" phasers do...

Scruffie wrote:Those soundclips aren't the best are they but I always hear good things about this box...
I'm hoping now there's the reissue's out some people will post some new youtube demos of it because I still haven't quite found a phaser I really like so I have high hopes for this one.

it doesn't sound as "standard" phasers do...

Hmm that's actually kinda nice, certainly reminds me of 70s phasing off some kind of TV Theme tune or something (although that could be the riff being played) not too sure about the overdrive though and a tad too complex to probably be worth cloning.
Top

I cannot believe this? No schematic? 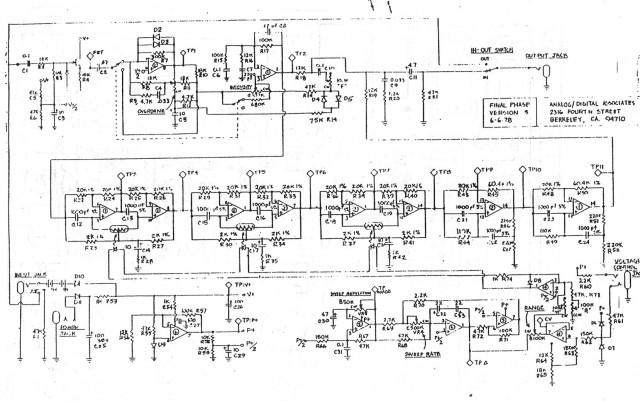 I cannot believe this....only one schematic?

I couldn't find a way to edit my last post. Here you go.

You mention in the gut shots thread that there are some issues in the schematic, care to elaborate?

I breadboarded that weird OD pot set up a while ago, seems to work okay with just a standard pot and not a tapped one.
Top

The Sweep Modulation pot (P3) is drawn incorrectly on the factory schematic 1087. (version 7)
When the control is turned clockwise, there should be more resistance between the inverting input and the output of the modulation oscillator op amp. (IC5B)
Version 5 (vactrol version) is drawn incorrectly as well. The factory schematic 1069 (version 9) is drawn correctly. It usually wouldn't matter, you could switch the wires on the lugs but...my build includes board mounted pots as in the original.

After I sourced some dual 50K center tapped pots for another project, I too bread boarded the drive circuit. I found that both ways worked as a drive control but, the center tapped version attenuated the drive output a bit.
Since then I found a trace side image which shows the drive area. I was able to verify that it is not a center tapped pot.
I still can't understand why it was drawn in that fashion!

Now for some good news! Yesterday was my Birthday. (that's not the good news) I decided to purchase a Birthday present for myself.
I bought a Final Phase, (reissue) and a NOS A/DA Control Pedal A.

After these items arrive, I'll dig in and reverse the reissue. I'll also be able to take readings for the clock adjustments.

The build I'm working on includes true bypass, a power supply input that accepts 18VDC or 12VAC, (as I did with the Mutron Flanger) a drive switch indicator LED, and a NPN buffered rate indicator LED for the IN/OUT effect switch.

The build is a bit smaller than the original, (fits in a 1590X enclosure) includes long pin, right angle board mounted pots, and board mounted low profile footswitches. (smaller footprint)

Here is a "sneak peek" of the board. 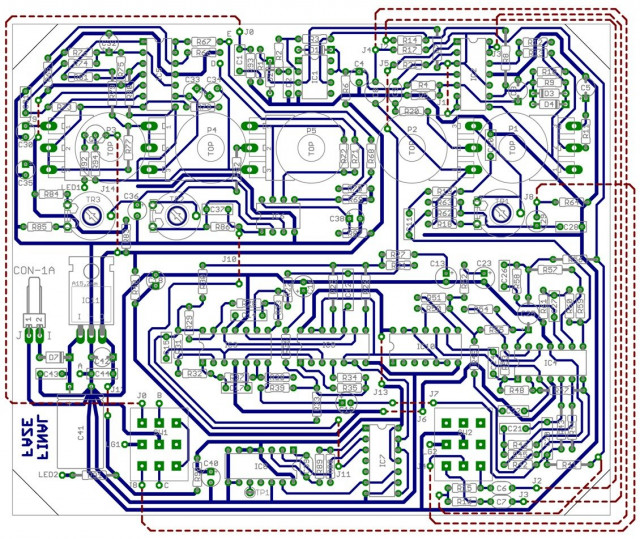 I received the reissue Thursday...and have been hard at work tracing the circuit.

It's a double sided board, smaller than the original, mostly 1/8W resistors.

The promo releases, and the user manual say that the drive section has been changed to a more "modern" sound. All that I see is an increase in gain and a cap added in the drive feedback loop. I guess louder/more distorted is "modern." 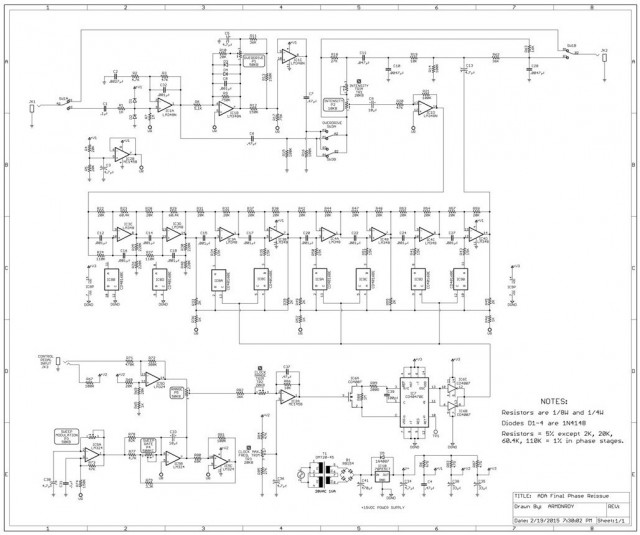 Yes...one of my favorite clocks as well.

A couple things of note:

The component designations on my drawing do not match the actual circuit board designations.

The resistor designations are printed under the resistors. It would have been necessary to pull all of the resistors to record the exact numbering.

All of the .47µf caps are monolithic ceramic. (MLCC) These caps were designated in the original factory documents.

I may add the reissue drive section to my build but..I'm pretty sure that I would have to include the reissue's changes in the feedback circuit, (Intensity) and the output section to compensate for the added drive gain.
Top 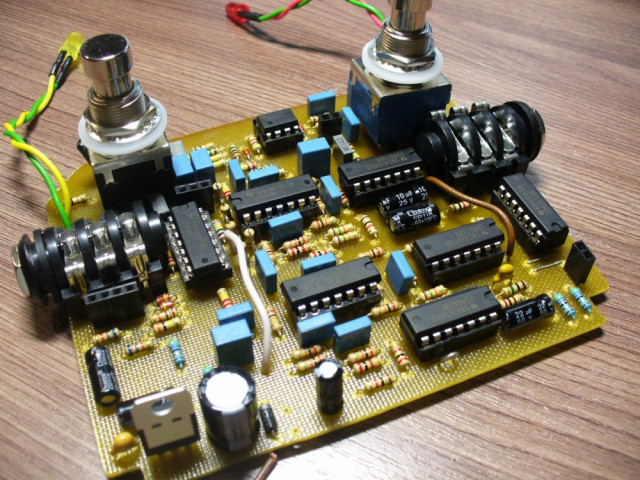 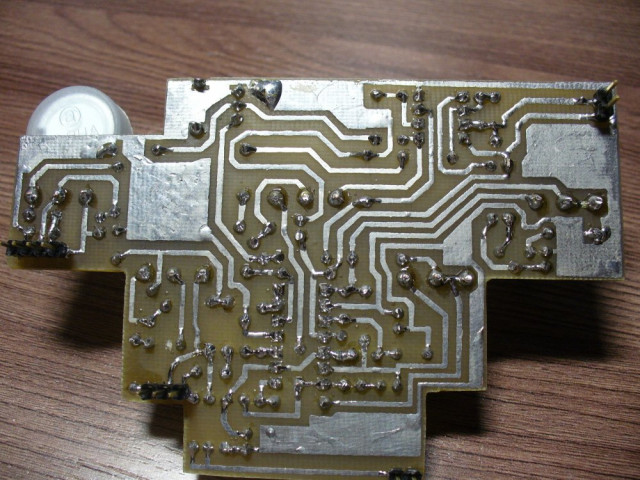 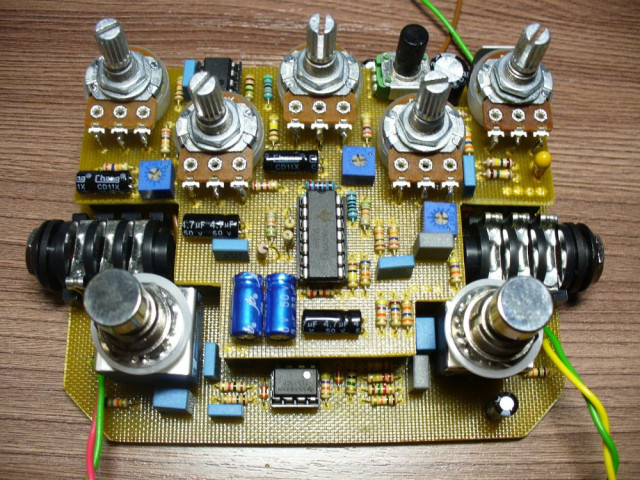 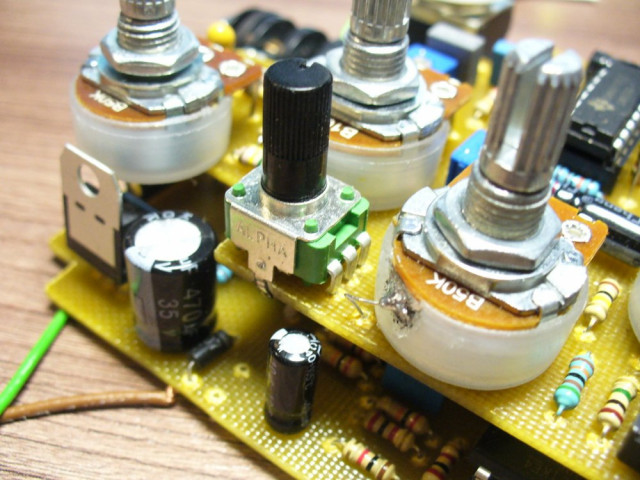 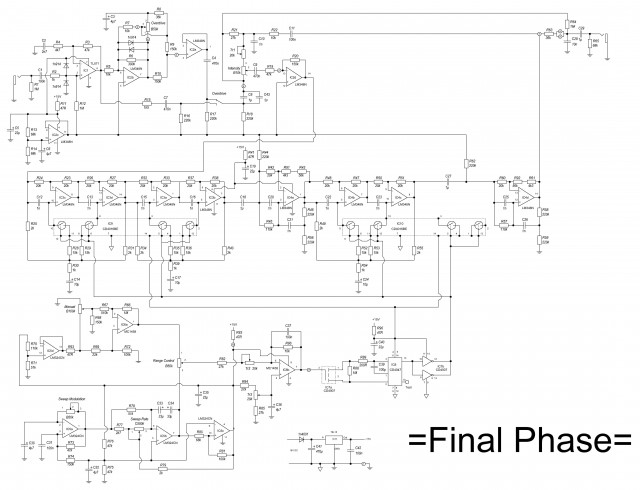 The device is designed to use the body Gainta B023 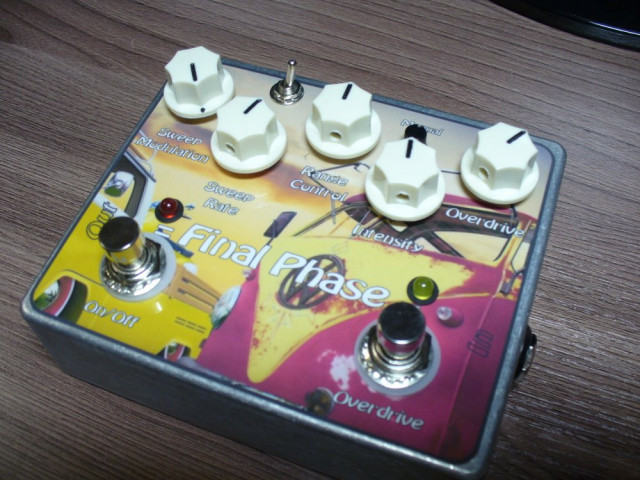 I could not find this on the VCO tuning frequency is determined therefore on the rumor turned out range from 40kHz to 1 MHz. If someone known to the factory settings will be very grateful.
Made more modification changes the waveform with the LCO with the triangle on the sine wave. 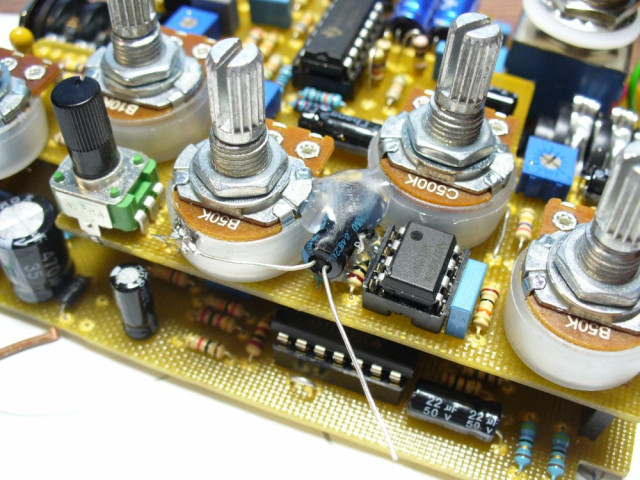 I'm not sure which version you based your build off of....but this is the reissue frequency reading.
I took frequency readings at the test point (pin 10) of the 4047.
With all controls CCW and the Range control CW, I measured:
min. 34kHz
max. 537kHz
The reissue CV is 15 volts. The original is 5 volts.
There are changes in the CV section (IC5D) and the LFO section of the reissue, but I would imagine that the clock frequency would be the same for both versions.
Top
Post Reply
23 posts