All about modern commercial stompbox circuits from Electro Harmonix over MXR, Boss and Ibanez into the nineties.
Post Reply
190 posts

Ladies and gentlemen, let me introduce you the long awaited reverse of what some consider as the best chorus ever made.
It's taken from an original 80's version. I can't tel if the actually made SCF is the same or if there are revisions of the old one

BUT some will have to work a little on it : it was already a hellish work for me to put all that on tracing paper (and did some retouching with graphic editor) and lets say I'm not in the mood to finish all that in any CAD especially considering that these kinda softwares really piss me off to use, I still a little old-school, in fact, most of my circuits are pencil hand traced direct to copper but lets say that the SCF seems to be a dead end by this mean so, in my advice, it would be very kind if some Eagle users (or other softs like that) would post their redraws.

If there are things difficult to read, as the real hand draws are easier to decypher than scanned versions, do not hesitate to ask me.
I can't guarantee my draws are 100% accurate so lets say s.o will have to mess with schematics which can be found on THIS PAGE

All resistors were classic 5%.
I think 1% metal film could be an improvement, going for Burr-Brown OPA series as AOp's too
Transforme is a little 18V 100mA PCB mounted
Don't ask me for a calibrating procedure, I didn't went further on this build. 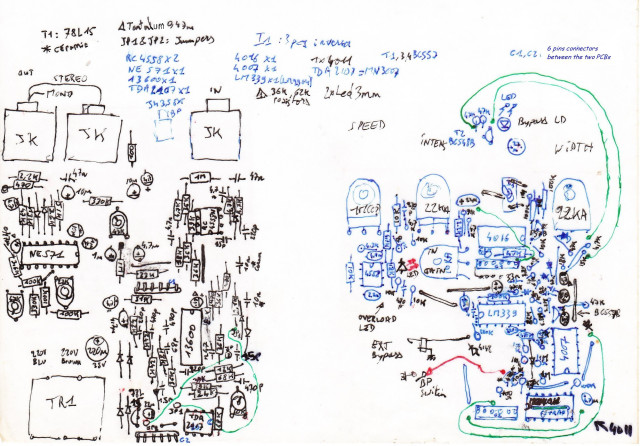 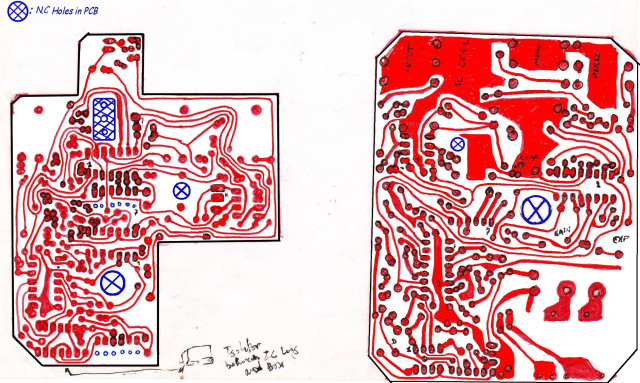 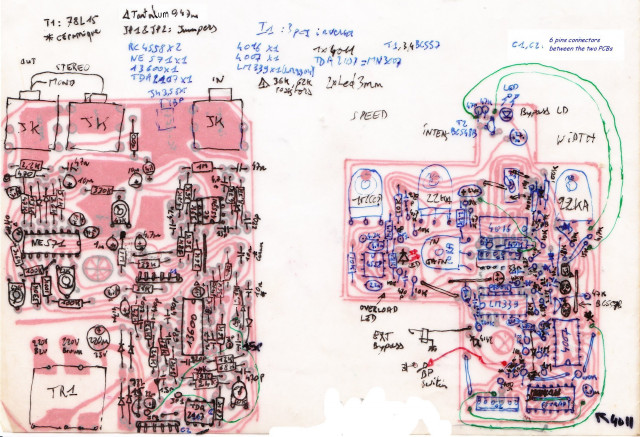 Errr, isn't anybody interested to help at completing it or the TC Electronics complexity makes everybody afraid to take the plunge.
I taught seing this baby that was still not reversed for 30 years and considered by many as the best chorus ever made would bring a rush on this page!

OK, seems not enough, so I took a little time today in order to make a Bill of Materials and some comments.
In the acoming days, I'll try to meet the owner of the SCF and borrow it to him again in ordr to take guts shots
ans verify a few values that seem to have become more or less unreadable on my tracing papers. I hope he'll be OK

C'mon guys, gimme a hand : this isn't posted anywhere else, don't tell me I'll have to ask for help on "the other forum"
Top

A tip of the hat to a Herculian effort. If I had the chops would be glad to help. Be patient, I imagine someone will jump in and help sooner or later. Don't give up.
Top

I'd like to try, but I can't say when I'd have time to do it. It might take me awhile.
"Analog electronics in music is dead. Analog effects pedal design is a dead art." - Fran
Top

Yes, this is a great pedal, especially for bass! I had one and wish I still had it.

I don't have any CAD programs...But in a little time I could Photoshop the traces black and white and maybe make some lines straighter??

I'm wishing someone would jump on it, i'm trying to learn eagle, but no where near the level of producing such a pcb.

many thanks for your amazing effort, that chorus is surely one of the best.
Top

I bought one long ago , when i tried a didigitec X modeling one , the setting i liked most
was the t.c. model , I think it really covers the bases and is Never too much
one of the better investments , but thanks for the efforts
the rackmount stereo one , I'd love to have but they still fetch Big Bux
Top

I would rather see it simplified.
The flanger is awful. The pitch modulation does an average fake leslie.
If I had the skills, I would be far more interested in making a stand alone chorus. This chorus has earned its reputation.
"Contemplate it - on the tree of woe." :Thulsa Doom
Top

I'd like to try, but I can't say when I'd have time to do it. It might take me awhile.

I don't have any CAD programs...But in a little time I could Photoshop the traces black and white and maybe make some lines straighter??

Any help is welcomed!!!!
Would it be retracing it nice with straighter lines, doing a cool layout, reworking it with a CAD,
completing the schematic
It's high time (cymbaline...) that the SCF is cracked.

Good news : I'v seen the owner of the SCF I ripped, I'll have it again

, so it'll be possible to correct some values I'm not sure
as ink has dribbled and there'll be pedal-p0rn too so...
So, dudes, I've stripped the baby of her chastity belt, where are the hecks? She's too bomba for you?


I would rather see it simplified.
The flanger is awful. The pitch modulation does an average fake leslie.
If I had the skills, I would be far more interested in making a stand alone chorus. This chorus has earned its reputation

as I have repaired and a bit used one, I do not agree about the awfulness of the flanger.
Maybe it's time to improve your skills using the layout to complete the schematics with values and code it all R1, C1 etc, it'll make it easier to ripp off the things which are useless for you, although, in my advice, there won't be a lot : there aren't a lot of differences between a chorus and a flanger, they both work on very very near principles
Top

Is it this one? 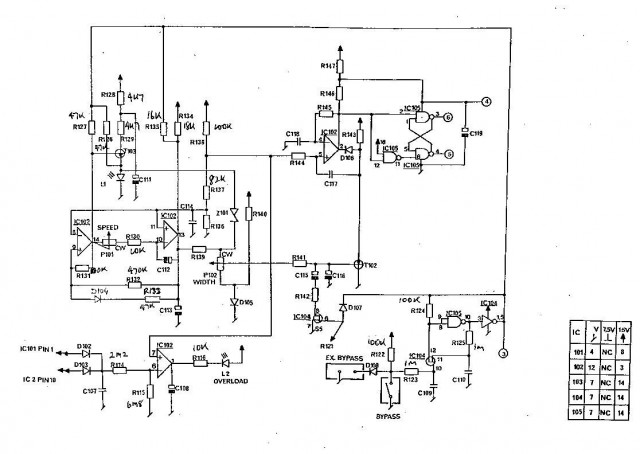 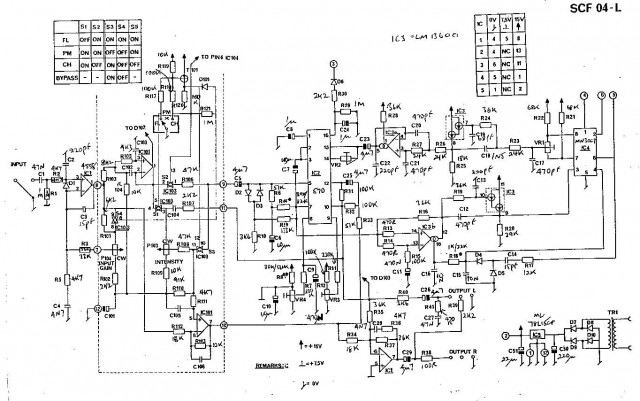 The factory scheme plus the info you provided should make this much easier.
"Analog electronics in music is dead. Analog effects pedal design is a dead art." - Fran
Top

I think so.
as the hardest of the job is done, if we act as a team with each dude takin just a small bit of 1 or two stages,
it won't be hard at all
Top

I would like to help you to redraw schematics of the TC more comprehensive and with verified values.

Is it possible to have a printed view of the original PCB (scan or picture)?

Hi stef
except for 2 or 3 values I indicated (due to ink sucking), all others are verified, and the PCB is right.
Sorry, my buddy moved to another appartment, It must be somewhere but until it's found back, I can't
go further

Do not hesitate to trace the PCB the nice way, I don't think anything is missing as I verified it at least 3 or 4 times
over 2 weeks part time work on it.
We'd just need one fast look in and all would be OK

I'm a bit puzzled by the lack of enthusiasm for this Chorus : it's still probably the best analog one ever made

Maybe is it too complicated???
Top

iznogoud wrote: I'm a bit puzzled by the lack of enthusiasm for this Chorus : it's still probably the best analog one ever made

Maybe is it too complicated???

It is over most of our heads. Only the advanced masters here are up to this one. I am a bit intimidated by it.
Great job, by the way. Your work with this pedal is very impressive.
It would take me two afternoons just to drill the pcb

But of course there is a huge amount of love for this pedal. I found one at a pawn shop 10 years ago and I still smile about my good fortune that day.
"Contemplate it - on the tree of woe." :Thulsa Doom
Top

Maybe would it be kind from you if you'd accept to open yours, take pictures and complete the (real few) missing values.
I think the worst part for it is to reverse-engineer.
It would be much much harder to build a Mesa or CAA amp clone than it or even any Moogerfooger (and frankly, I would not have enough patience to reverse one now : patience is the bad thing about doin tronics when you get older : you give up much much faster than when you are 20 to 30 old

Tell me if you see mistake(s) and wich infos I must ad.

to be continued...
Top

soulsonic wrote:The factory scheme plus the info you provided should make this much easier.