Here's a perf and PCB layout based on Induction's schematic. Should fit in a 1590a.

induction wrote:Sorry, I guess my post came out snarkier than I intended it.

No worries (as Dr Nomis would probably say), I was probably a bit abrupt in my first post, it was near midnight here and I'd had a few scotches. Never a good idea to post (or go on Ebay) when you've had a few.

(I saw your post yesterday but was on my tablet and can't be doing with typing on those poxy little touch keyboards.)
Politics is the art of so plucking the goose as to obtain the most feathers with the least squawking. - R.G. 2011
Jeez, she's an ugly bastard, she makes my socks hurt. I hope it's no ones missus here. - Ice-9 2012
Top

Selfdestoryer verified my layout last night. The above image is wrong though. Here's a link to the verified layout:

It was mentioned earlier in one of the ESR Graphic Fuzz threads here or at DIYSB that this circuit is sensitive to the source impedance feeding pin 2. It doesn't like it. In fact when I had my bass roll-off knob engaged on the guitar all the pedal would do is squeal.

I put a simple JFET buffer feeding pin 2 of the 741 op amp and the squealing/oscillation went away. The circuit I used is straight from muzique, I subbed 1.5M resistors for the 1M because I have a bunch and used a 2N5457 JFET:

Also earlier, larsj contributed that adding a potentiometer between pins 1 and 5 (the offset null setting) produced some interesting results. The datasheet for the LM741CP says to use a 10k linear pot, I grabbed a 50k linear by mistake, but playing around with the pot you can generate a square wave or a sawtooth wave at the output, and several interesting permutations in between and at the extremes. The sawtooth and square wave generate very different harmonic profiles.
Top

Thanks for revisiting this circuit! I had a go at it on the breadboard some years back, but for some reason I didn't commit to a build. I think I'll give it another shot and try some of those tricks.
I wish I knew what John over at Basic Audio added to his version of this pedal...... it sounds extra nasty!
fuck smooth tone, fuck eric johnson - Seiche
Top

greenskull wrote:Thanks for revisiting this circuit! I had a go at it on the breadboard some years back, but for some reason I didn't commit to a build. I think I'll give it another shot and try some of those tricks.
I wish I knew what John over at Basic Audio added to his version of this pedal...... it sounds extra nasty!

I wish I could go back and edit my previous post. That JFET buffer makes the "FREQ" pot practically useless. You still get the crazy fuzz and it kills the out of control oscillation, but it kills the frequency resonance effect. I put mine on a DPDT bypass switch for when I want the fuzz but none of the squeal. The pedal needs direct interaction with the guitar's controls without a buffer to get many of the sounds out of it.

I also added a squeal tamer as others have shown in the posts above, along with a switch to go back to stock. It keeps some of the functionality of the FREQ pot like the weird sub-clipping resonance and just a tiny bit of squealing, but not the crazy oscillation every time I stop playing.

so if one woud use active pick ups , would this in fact negate the filter effect knob , or change the effect ?

dont mind me i am slow
Top

petey twofinger wrote:so if one woud use active pick ups , would this in fact negate the filter effect knob , or change the effect ?

dont mind me i am slow

I'm not sure what the output impedance of active pickups looks like but I would say yes. I have a bass roll-off on my guitar and when engaged it rendered the effect useless.
Top

Finally I made this one

Tried the first schemo, without input and output caps, but it did not work.
Then tried the later schematic with the regular power rail, and it worked at first try; the soud is very similar to the YT videos.

It's a funny pedal, but I think I won't box it right now, the feedback is nice, but makes the use of the thing quite limited. I like it also because, like, the hot cake (a totally different animal, I reckon), it overdrives the IC without diodes.

I did some experiments with the 0,1 uF and 200R output network: it seem to have a big influence on the feedback, and I thin it can help tuning it.
I really still don't understand how it works: if the 1M pot was a fixed resistor I would say it's just an inverting IC amp with ultre high gain.... but since the pot is just a variable resistor I really can't explain how it works. Strange beast.
Top

Can I use the TL071? I have built the vero from tabbycat and I have no sound.

Some oscillation but nothing more. The 9v and ground are the common true?
Top

Missing trace cut under R5 - you have connect the level pot to +9V.
Not very healthy for the folowing pedal and for C6...

Never use a layout before you've compared it to the schematic!
Layouts
Top

Well, I thought the layout was verified, in theory works well. So, the cut under R5 it's wrong?
Top

The vero IS supposed to be verified, I think roseblood is suggesting that IF you missed that hard-to-spot cut under R5, this would send 9v DC direct to the output.

brownwhopping wrote:How can I learn by reading threads an making circuits, when some day I can see a lawsuit or somebody beat me in the face for that?

I've added a volume pot after the level. Sounds amazing, full and organic but the filter pot only works well backward for my taste. How can I set the filter at minimum? maybe with a low value resistor between wires filter 2 and 3?
Top

Location: i could tell you but i'd have to kill you.
Has thanked: 199 times
Been thanked: 53 times

zosotone wrote:Well, I thought the layout was verified, in theory works well. So, the cut under R5 it's wrong?

hi zosotone, the original (larger) layout i did for this is earlier in this thread ( https://www.freestompboxes.org/viewtopic ... 60#p247467 ). that one i built and works great. 1-1 with the main demo on yt.

i revisited it a while later and realised if i jiggled a couple of components around it could be a few rows smaller for those who like compact layouts. as the r5 cut then moved to under the resistor (though still just visible through the colour) i added an additional written note to the layout just in case anyone missed it.

i haven't built the second layout (though it is fundamentally the first just compacted, which i have built) but members at gfx have and reported good results.

it also might be worth swapping lm741 just in case you have a faulty one. i read somewhere that there are different types of lm741, some which will work and some which don't. have just had a quick google but can't find that forum post quickly,
but i remember that issue coming up somewhere. perhaps it's in the suffix. some are marked lm741tc and some lm741ua or something alone those lines.

sorry to hear you haven't been able to get a good result. as i say, i built the first layout and got excellent results. the subsequent compacting of the layout was pretty minimal, just shuffling things left or right to tidy up but maintining the basic topography.
"be a good animal, true to your instincts" (d.h. lawrence).
"there is no excellent beauty that hath not some strangeness in the proportion" (francis bacon).
"ni dieu ni maître" (anarchist slogan).
Top

3 years later... I wanted to try an op amp on eyelet board, back to the Graphic Fuzz. It sounds better to me than the 1st vero layout I posted- more responsive and tamable with the guitar volume/filter. Must be the mojo parts. Either ua741 or lm741 work fine as long as they are Texas Instruments. 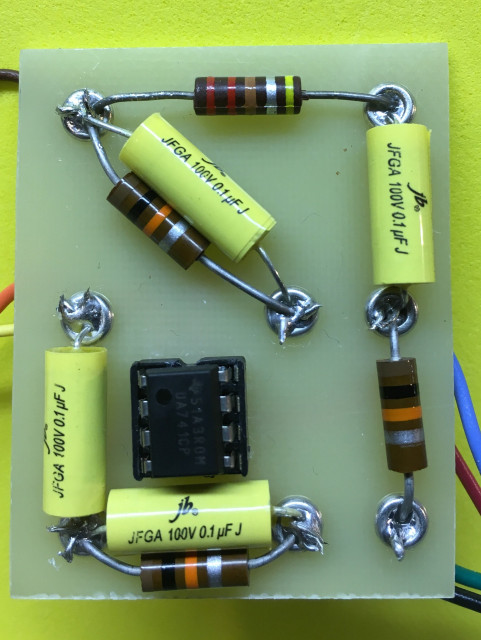 So the tabbycat working layout is the one posted above by zosotone, (dated on 25-42015), right?
Top

Some pictures of a unit in the original box 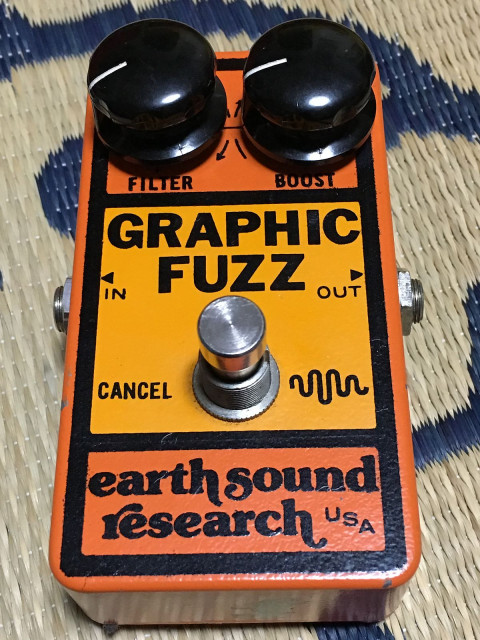 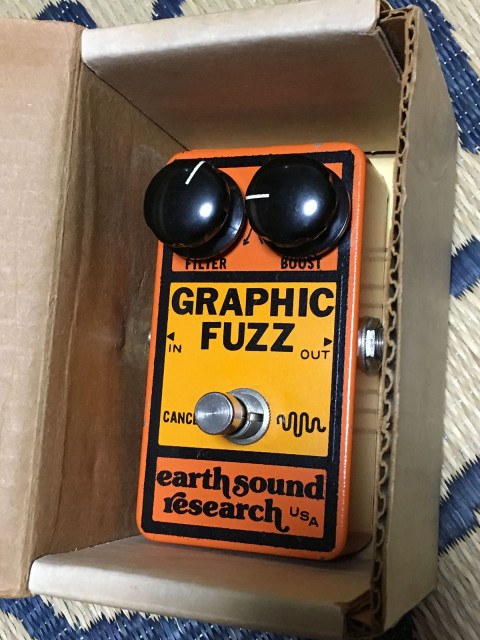 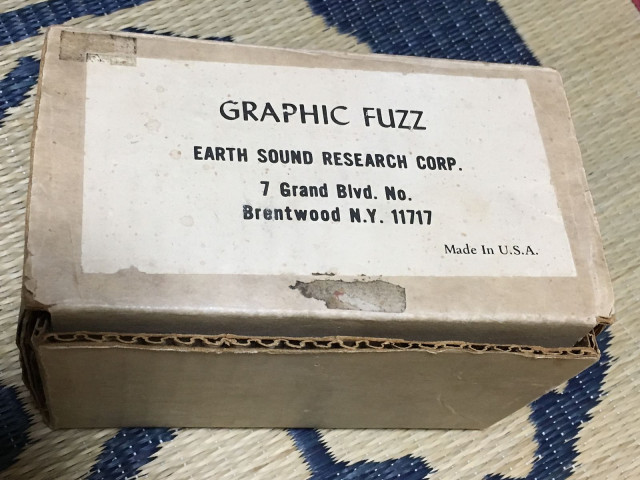 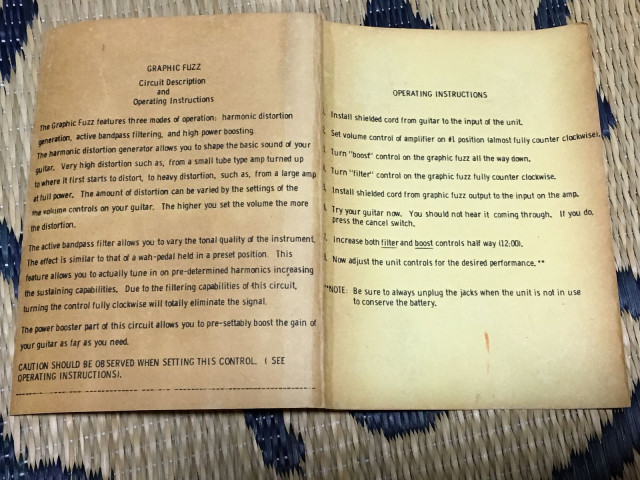 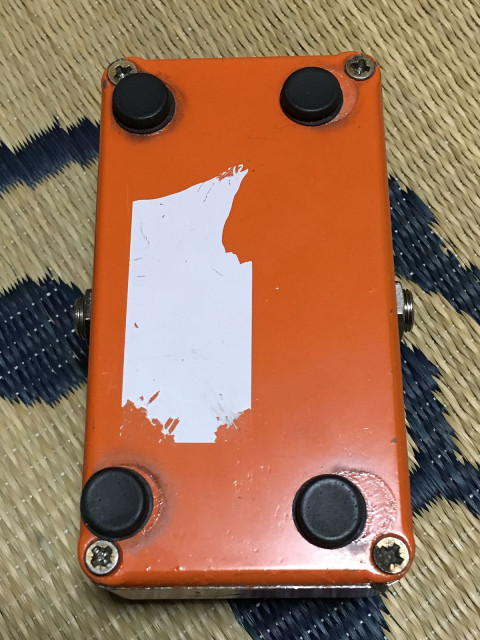 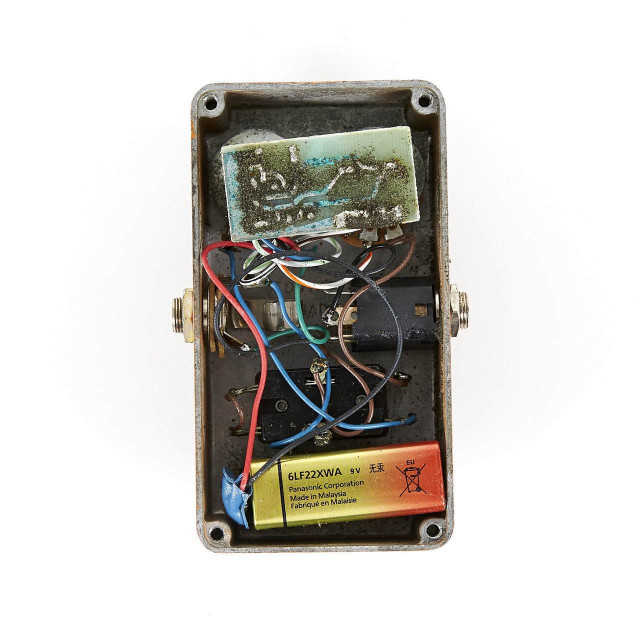 Wasn’t this based on the Anderton comparator Fuzz?
Top
Post Reply
99 posts