My first question would be is it possible to adjust the circuit to decrease the maximum gain a little? I've got LDR's that come close but then drive a little to hard causing a bit of distortion. Any help would be great!

Perhaps I'll try asking in different places, but if anyone could help out it would be really great!

To make sure this post doesn't go wasted, here are some gut shots of an original 18v supasustain. 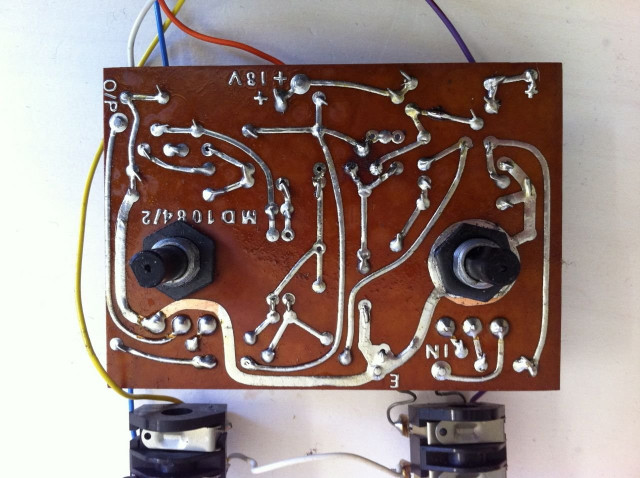 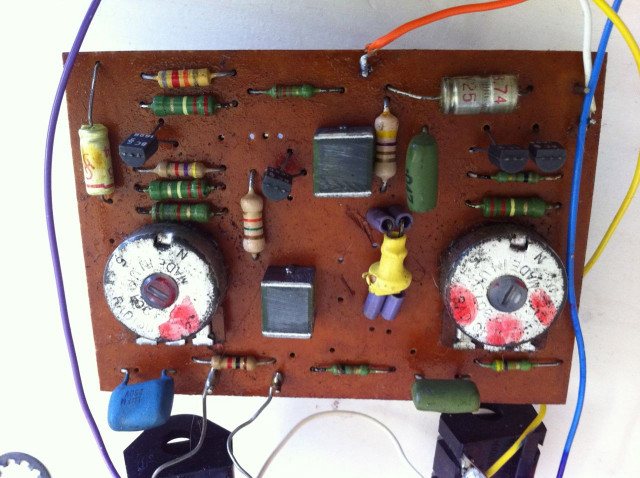 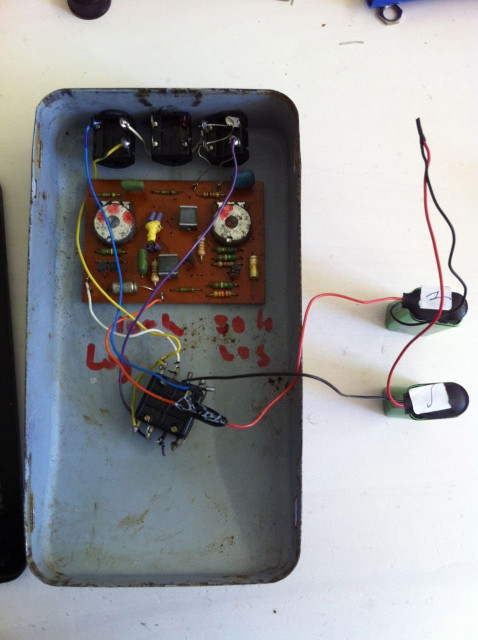 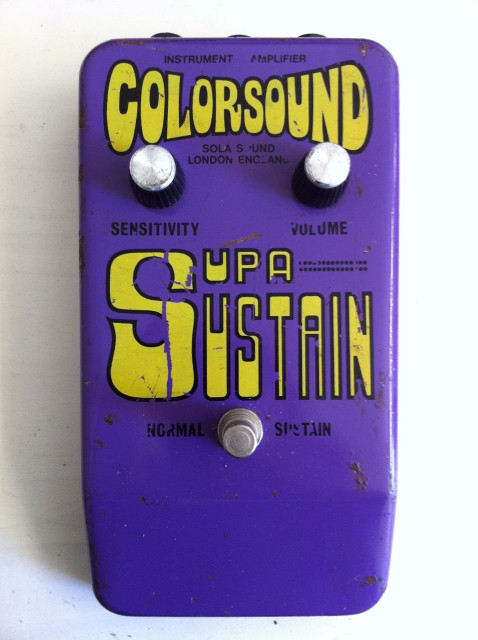 Hotstuff wrote:My first question would be is it possible to adjust the circuit to decrease the maximum gain a little? I've got LDR's that come close but then drive a little to hard causing a bit of distortion. Any help would be great!

You can reduce the gain by reducing the value of the 220k in the collector of the first stage. You might have to increase the value of the emitter resistors (1k5 and 1k8) beneath Q2 slightly, to keep the collector of Q2 at Vcc/2. It's very important (for minimum distortion)to keep the collector of Q2 at half the supply voltage - many of the original Colorsound ones were horribly misbiased! The LDR doesn't introduce distortion - it's the bad biasing. You can try almost any LDR by the LED MUST be an old-fashioned low efficiency type.
"Why is it humming?" "Because it doesn't know the words!"
Top

I built another one of these for a friend who'd destroyed one by letting batteries leak inside it....

I used a generic Ebay LDR and an ordinary low efficiency green 3mm LED. I breadboarded it first, since I wanted to tweak the bias for a different supply voltage. The critical thing is to get the collector of the second transistor at half the supply voltage if you don't want a compressed fuzz box! The way to achieve this is to replace (temporarily) the LDR with a fixed resistor (I used 47k) and then tweak the emitter resistors at Q2 and the collector load resistor at Q1. You can even put in (temporarily) preset resistors and twiddle for best results. I replaced the emitter resistors in Q2 with a 5k preset with the wiper going to the base bias resistor for Q1 - I could get the collector of Q2 to half rail at almost any supply voltage from 7V (a flat PP3) up to 12V without adjustment.

It's worthwhile reducing the collector resistor of Q1, especially if you're hitting the thing with the output of humbuckers. I've taken it as low as 120k with reasonable results, but 150 - 180k is better.

This circuit is really open to modifications - it's difficult to break, so have a play! There's more than enough output from Q2 to feed most kinds of clipping stages, so making a sustain / fuzz is really easy. I'd have two level controls - one for the clean sustain output and the other for the fuzzed sustain output, and select the right control with one pole of the "fuzz" footswitch.
"Why is it humming?" "Because it doesn't know the words!"
Top

This is just the result of a quick google... don't know how correct they are, but they all go back to the Roland unit referenced above...