Morley Wah Repair (seems to been have modded for 240V).

Someone gave me an old Morley Wah for repair, It's a Morley "Power Wah Boost". One of those with a power cord (and a small internal transformer)

I checked it and the pedal ins't functioning (only faint sound)
Upon close inspection it seems that:
-the light bulb is blown (wich drives the LDR)
-The power chord is replaced.
-It seems that a lot of resistors have been replaced (not sure though).

If I look up the specs for the bulb, it asks for 24v, however, I measure +40 volts at the bulb. Also good to know that I live in Europe, so 240v instead of 110/120.
My suspicion is that this is a 110v decive, and someone connected a Euro plug for 240v and maybe replaced a bunch of resistors to get the right transistor voltages.

Anyhow, my question is: what would be the best course of action? See if I can further change resistors to lower the voltage for the bulb and measure if all voltages are correclt (will need some help, I normally work with tubes not transistors and have no idea which voltages they expect), or alternatively, bring it back to original spec and replace the transformer, assuming that I can find the right transformer?

Also: anyone knows some good resources on the wah? I guess I can find the USA schematic, but one with correct voltages or the export version (if it exists) or other service docs could come handy.

Thanks in advance for your ideas.
Top

Checked it and the voltages for the collectors of the transistors might be correct. 25V for the first and the third, 35 for the Second and fourth (schematic asks for 55v for these two though, is that a problem?).

So it might be that all is correct, except for the voltages of the bulb...
Top

If the bulb is fed through a dropper resistor and the bulb is blown then your meter will register the voltage supplied to the resistor because it will draw negligible current so the volt drop will be almost zero.
Politics is the art of so plucking the goose as to obtain the most feathers with the least squawking. - R.G. 2011
Jeez, she's an ugly bastard, she makes my socks hurt. I hope it's no ones missus here. - Ice-9 2012
Top 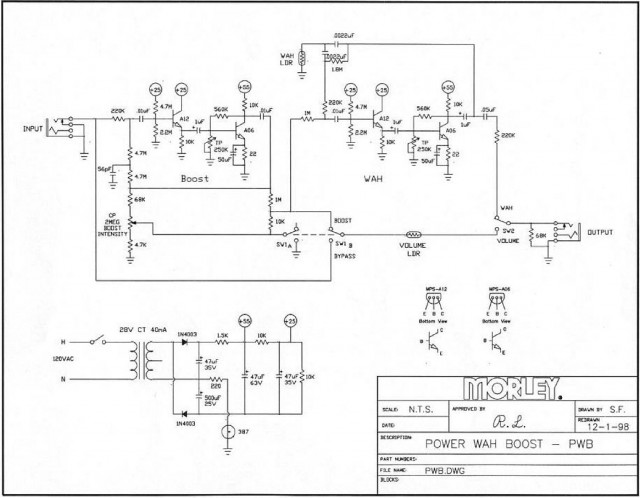 I have had several contacts with Scott from Morley when I had repair problems with the pedals.
I also had a pedal with LED LDR couplers on the workbench that didn't react well.
He explained to me that when the pedal was not in use for a long time the LDRs would passivate and you would have to expose them to light for a while to reactivate them.
This was indeed the solution to the problem.
Top